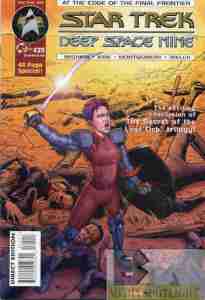 “I’m not cleaning this up.”

“The Secret Of The Lost Orb” finale: “Gods Of War”

With no other Federation ship nearby (surprisingly not even the Enterprise…I thought that was their whole thing) except for the Defiant even Sisko needs some backup, so he calling in a favor with the Cardassians who have their own grievance against Crockett. (He just keeps making friends everywhere.) Together they go up against an approaching Aresian strike team and defeat them, though they do destroy one Cardassian ship thanks to some intel they got from Crockett…which earns him a quick death once Dukat finds out. He probably should have waited until Crockett could have told them more about the Aresians, but the solution comes from Kira, who thanks to a suggestion by Quark of all people she uses the Orb and decides that the Orbs tell the gifted race what they need to know, and the Aresians have different needs than the Bajorans. She and Winn actually agree to return the Orb to the Aresians as a peace gesture. Satisfied with this “conquest” the Aresians return home.

What they got right: Kira has a crisis of faith but actually come out the other side with stronger faith and a new perspective. That’s good both storywise, for the character in general, and to not mess up with potential show continuity. They even bring up an episode where her faith was also being tested. The Aresian triumvirate attack method is a good addition to their culture, because of their belief in three war gods.

What they got wrong: When you think about it the baddies won everything here. The Cardassians get to fight and get their revenge on Crockett. Kai Winn gets to deny a sect that opposes her their Orb. The Aresains now have two Orbs, including the one they stole in the first place, and wanted to steal all the others. Meanwhile, the Federation has damaged ships and maybe a few dead from the battles, that sect still has lost their Orb to thievery, Crockett is the only baddie who loses (on account of being dead and all), and all our heroes get is a resolution to a problem they didn’t want, a revelation that wouldn’t have been necessary if not for the theft, and really end up with less than they started this with. Yay peace?

Recommendation: In all honesty though I did very much enjoy this arc and do recommend fans pick it up.