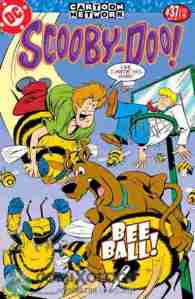 Actually, Shaggy doesn’t like any sports. He just goes for the stadium food.

Giant bees are terrorizing a city so the mayor calls on Mystery, Incorporated for help. The accused is a local bee keeper whose lakefront property is catching the eye of a number of would-be business developers. This one plays on one of their current themes of land grabbers but does so in a way that feels natural. It’s still another mystery we in the audience can’t solve, and it seems the comics rarely remember that part of the Scooby-Doo shows. It’s a good story otherwise.

The gang tries to take in a baseball game with Fred’s favorite baseball team. Too bad a witch keeps cursing the pitchers. I don’t know about anyone reading along but I saw the villain reveal coming (at least who hired our villains) so again not much of a mystery. However, the explanation of how they pulled off the trick is satisfying within the show’s cartoony heritage and the story was overall enjoyable.

So not great stories and terrible mysteries but still good stories. It’ll make for a pleasant read but not much else.