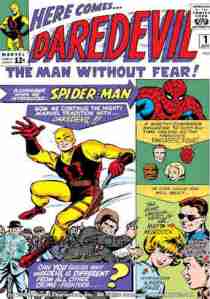 You know he’s blind because he thought that color scheme worked. Mighty Mouse you aren’t, Matt.

“The Origin Of Daredevil”

Matt Murdock’s father was a boxer who fell on hard times as he got older. He made his son study to become something better even at the cost of playing with the other kids. Not realizing Matt’s not playing games wasn’t his idea they mocked him by calling him a “daredevil”. To get his son into college the senior Murdock agreed to work with The Fixer even though he knew the man was a crooked promoter. Sure enough the Fixer lives up to his name and tries to “fix” Battling Murdock’s fight, but he’d rather his son be proud of him and wins it instead. The Fixer has him killed in revenge. Matt and his friend Foggy graduate college and open a law firm but Matt still wants to bring the hitman and his boss to justice. However, an accident involving radioactive chemicals hitting his eyes while rescuing an old man from a speeding truck took away his sight…but enhances his senses and reflexes. Matt becomes a costumed hero named Daredevil to bring his father’s killers to justice. The hitman is tricked into confessing after The Fixer has a heart attack, but this won’t be the last adventures for Daredevil.

What they got right: As an introduction to the character this story still holds up well after all these years. The story starts with Daredevil attacking the Fixer’s men, then flashes back through the origin story, while also highlighting not only Daredevil’s powers but some of his weaknesses (missing loud noises messing with his enhanced hearing but showing that his hearing can be interfered with). It really shows off the abilities of their new hero and he wins in the end. I guess there weren’t plans on having the Fixer as a recurring threat. The dude’s a crooked boxing manager, not the kingpin of crime after all.

What they got wrong: Why does the truck say “Ajak Chemicals” instead of “TCRI”? Didn’t they read Teenage Mutant Ninja Turtles? All kidding aside, the book isn’t perfect. As mentioned in the cover caption the outfit doesn’t look nearly as good as later costumes, especially his traditional all-red outfit. It’s sad watching Karen Page being all sweet given what Frank Miller did to her in later years. On the other hand it’s a bit weird in general when she starts talking about something about Matt makes a girl want to take him in his arms or hearing both Karen and Foggy treat him like someone who needs looking after as if he were an invalid instead of a man who can’t see. Blind people need more help than others but being smart isn’t the only reason Matt can survive on his own if need be. It’s a bit insulting but we still have that attitude towards the vision impaired to the point where some refuse they actually need because of all the doting about not letting them do the things they can do.

Recommendation: This is a great example of an origin story presentation that holds up to modern reading. Check this one out even if you aren’t a Daredevil fan.