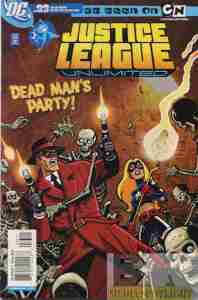 They really take that “leave your body at the door” thing seriously.

“Everything Old Is New Again”

Stargirl and Crimson Avenger have no interest in bridging the generation gap, but are willing to toss water balloons over it. They do not get along at all, so when they try to stop Morgan Le Fey from restoring her son’s youth they end up swapping bodies with no way of telling the League about their situation lest they be stuck permanent. (Stupid spell rules.) Instead they end up living a week of each other’s lives, and learn to come together to undo the spell and give Morgan and Mordred a taste of their own medicine.

What they got right: Granted, this story has been done before and I don’t think they added anything new. However, it is still funny to see them living each other’s lives. I think this one of those obligatory stories that everyone feels they have to write in a science fiction/fantasy universe after a while and your typical superhero universe has elements of both.

What they got wrong: However again, we don’t really see what gives them the incite to accept the other’s perspective and see the flaws in their own. Courtney (actually Lee Travis, the version of Crimson Avenger used in the DCAU) gets dragged around by her best friend, plays a game of shuffleboard and I guess learns to relax on Saturday. Lee (aka Courtney Witmore, who now has her own TV show) has to play chess, gets an exam I’m sure the real Lee is glad he didn’t go through, goes to a tanning salon for some reason, and for some other reason ditches a Johnny Depp film festival for the library to read up on the stolen object. Maybe it’s me but I’m not inferring what I’m supposed to apparently.

Recommendation: Ultimately though I did enjoy the story and it’s worth looking into but don’t expect anything new added to the “freaky Friday” formula.