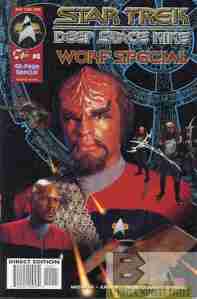 “I’ve heard of a double exposure but this is overdoing it.”

Obviously this story takes place after Worf (Michael Dorn) joined the cast of Deep Space Nine. The Klingons aren’t convinced the Founders haven’t infiltrated Starfleet and now the two sides are back to not getting along. So when an explosion rocks a space station Worf was visiting along with Kira and Odo he gets blamed. Worf pursues the real saboteurs to clear his name but just when it looks like they may have him they’re apparently destroyed by Gurlag, who wants Worf to side with the Klingons. It’s soon exposed that this was all a trick by Gurlag but he didn’t count on Odo testing Worf’s ability to detect a Changeling through observation, and he ends up saving Worf when Gurlag’s crew turns out to be less honorable than he is. Worf is led to the saboteurs (they weren’t really blown up) and is able to clear his name.

What they got right: The story itself is quite good. The light technology used to frame Worf and protect the saboteurs is something I’m surprised the show hasn’t broken out before or since given their use of holograms. Odo gives Worf a good speech about how they aren’t alone on DS9 despite the actions of their respective races. And I really like the art.

What they got wrong: So what happened to Major Kira? She’s seen still at the station, gets one speaking line, and disappears from the story after that though the Defiant is supposedly still there.

In the short back-up story Worf spends time in the holosuite with an Old West adventure sent from Alexander. Too bad Kira and Dax ruin the fun. It’s a fun little story and if this had been full-length you know it would have turned into a “malfunctioning holodeck tries to kill everyone” story so shorter is better here. The book also contains a brief look at Worf’s history up to ending up on DS9.

Recommendation: A good issue all around to pick up if you’re a fan of Worf.