I’m not giving each group their own article just to draw things out. Most people are only offering an overview of the whole event. I want to actually take time to theorize about where it’s going (though we only have solicitations for the first month of this two month event), look over the costumes, and look over the logos. The logos, as you can see from the promo art, is trying to evoke a futuristic feel. Some of them work and some of them just look lazy or would have been better off playing with the regular logo. We’ll go over that in due course.

Whether or not 5G was intended to be DC’s new direction (and given DiDio’s history I’m still doubtful it wasn’t his plan, or at least he was going to do it for a lot longer than Perch might think) Future State is just going to be a shorter two month event. Every title is canceled except for stuff not tied to the main DC Universe and of course some Batman related side comics. Instead we’re getting larger comics with three different stories and a bunch of one-shots or two issue specials that tie in to the main event…except there doesn’t appear to be a central comic here that the event rallies around. I think that’s another check in the “new direction” column and I’m curious how they’re planning to undo all this by March.

I’m not going to go over every story in each family because that will take to long. It will be a deeper dive than some other articles and videos I’ve seen on the matter though. We’ll start with the Batman family, as it’s the one DC cares about most even now and this does spring out of Dark Nights, the multiversal tale all about how awesome Batman is. I’ve gone over the press release and the January solicitations and I did notice one or two interesting omissions that makes me worried about where they’re taking this. Note that these are only theories and I could (hopefully) be wrong, but given where this comes from I lack hope…and I’m tired of saying that about the universe that gave us Superman. Oh, we’ll get to that one tomorrow.

In this alternate future someone called the Magistrate has taken over Gotham City and outlawed masks. That’s not a pandemic story, that’s an anti-superhero move. There aren’t that many superheroes in Gotham though. Batman, Robin, Red Robin, Red Hood if you want to stretch, Spoiler, Batgirl, Orphan, Batwoman, maybe Ragman if he made it past Flashpoint, it’s really a small group. Yet some of the solicitations make it sound like the clan’s become Justice League sized. Also Bruce Wayne is dead, or at least presumed dead, since he’s actually not. Instead he’ll be trying to solve his own “murder” and who could have known he was Batman. His series is called Dark Detective, and will have backup features that include trying again to get the WildStorm characters into the DC universe with the return of Grifter. I don’t care about Grifter so I’m going to ignore him. 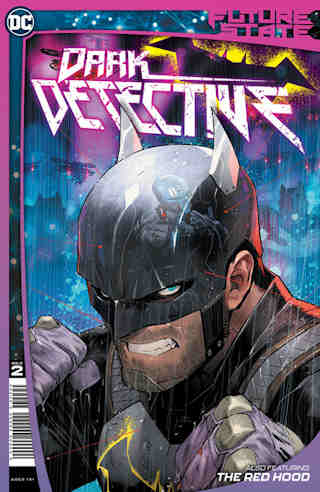 Batman hasn’t shaved in years. I’m use to that. What I’m not used to is the Bat symbol. It looks like he drew it on with a yellow marker. This is the best look we get of it in the two covers currently released. As far as the Dark Detective logo goes I’m not super impressed. Most of these look like fonts though I will give credit when they actually put effort into altering it. This kind of doesn’t. A few gaps in the letters and a Bat symbol. There’s some effort here but it’s like minimal effort just to show they didn’t just slap a bunch of letters on it. I mean, you’d think I couldn’t complain too much given the Chapter By Chapter logo.

However that’s just intended to be a stamp on the cover of whatever novel I’m reviewing at the time. This is your main cover logo and I would think you’d want it to really stand out on the store shelves. Of course that hasn’t been DC’s design policy since the turn of the century.

According to the solicitations we also learn that Jason Todd is working for the Magistrate hunting down masked vigilantes. I could understand him hunting criminals but not many of the supervillains in Gotham City wear masks because they’re usually disfigured anyway. The Riddler is the only one even coming to my mind at the moment. Someone needs to figure out if Jason is good or evil and stick with it! So if Bruce isn’t technically Batman at the moment who is?

That would be Luke Fox, formerly Batwing. I’m not sure WHY he’s the new Batwing unless Just Some Guy is right and this is for diversity points. I guess he’s covering his lower face to pull a Phantom and pretend there’s only one. Well, still a better choice than Jean-Paul Valley I guess. The Next Batman is another one of the multi-story oversized comics, which will probably cost more. According to these solicits Magistrate is a group who take over “mask crimes” after some event called “A-Day”. I put more work into Herodude’s “Average City” than they put into this. It was a day. Really, guys? I thought the Magistrate was going to be some dude, like Arkham Knight, so at least that was proven wrong. Luke’s adventures seem to center around doing normal Batman stuff while working around Magistrate’s “Peacekeepers” and there may or may not be a tie to Lucius Fox. That does play into the notion of Bruce’s legacy being tied to Magistrate, as noted in the Dark Detective solicits, but I’m still worried they’ll go for someone else. I’ll come back to that.

The best look we have at Luke’s Bat-costume is on the promo art or the Justice League cover and it’s…nothing spectacular. The cape’s too small, the Bat is just this big yellow thing, there’s no interesting detail on the utility belt…it doesn’t really impress and I don’t think it’s going to invoke any kind of fear the way Bruce’s usual costumes do. The title logo…tries. If it wasn’t the name Batman it wouldn’t stand out at all really. It’s not terrible but not all that creative as Batman logos go. Maybe it looks like a cape but it doesn’t really have that bat vibe.

Meanwhile stories will have Batgirls Cassandra Cain and Stephanie Brown in prison but Cass is actually on a mission. I’m not sure how Steph is in here at Batgirl when she’s also in Tim’s title as the Spoiler. It makes me wonder how much coordination was actually done here. The first of the solo comics we’re looking at, they’re going to be stopping a drug called Lazarus Resin, which I’m guessing comes from the Lazarus Pits and apparently someone at Magistrate has plans for this thing. The private anti-mask group hired by the cops is looking to play with drugs. The mayor sees no problem with this? The title is Robin Eternal and apparently Tim and Stephanie aren’t getting along. Maybe he heard about that time she sold out the Bat family after his death to supposedly save their lives? Yeah, I hope she’s at least apologized for that or Tim got on her for it. I haven’t forgotten.

Again, not a very good look at his FS costume but that logo doesn’t even try at all. And the one for Harley Quinn (which I won’t be going over because I don’t care) is just the usual logo in neon pink! There’s no style to the “Robin” and the “Eternal”… I think I have that font! I think it’s called Keypunch or something. And this is the last logo worth looking at. I think the logo for Catwoman, where she’s trying to rescue someone from a prison train loaded with innocent children (possibly to keep the heroes at bay) alongside a team called the Strays and her new protege, just looks like the image is staticy, and she’ll also be in the Gotham City Sirens where they decide to go shopping. I’m hoping there’s more to the story than that. The logo Nightwing isn’t anything special and Dick just has his usual costume. There’s a Batman/Superman comic set before the stuff we’ll be talking about tomorrow and it’s just the usual logo slightly altered.

The thing is this isn’t anything we haven’t seen before not just elsewhere but in the DC universe, and I think that’s going to come up again. Villains taking over the city and outlawing superheroes, forcing them to go underground to save people? Seen it. Bruce playing dead to find his would-be killer? Seen it. They’re going to have to work to make these ideas feel fresh. The only thing I’m worried about are three names I didn’t see in the January solicitations. Why isn’t Damian Wayne the new Batman if Jon is the new Superman, and where IS Damian? Is he the one getting rescued by Catwoman and her strays? Is he who Cass is after? When I thought the Magistrate was a single person I was worried it would be him, or possibly Commissioner Gordon, who also isn’t mentioned, and for that matter neither is Barbara. If she died it would explain why Jim would become the Magistrate and I’m still not convinced he’s involved somehow. When Gordon was Police Batman he was anti-vigilante until the real Batman returned. Or maybe one of them is Catwoman’s new protege? These three are kind of important and their absence is theory fodder.

One down, two to go. Tomorrow we look at the Superman family of Future State stories and see some odd choices for that one, like Superman leaving and somehow Wonder Woman being put into this group. I’m just hoping for better logos. I’m not expecting them but a boy can dream. Too bad I’m not a boy.