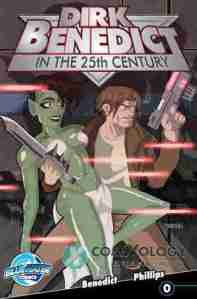 Watch where you put that hand, Dirk. And I don’t just mean the sword.

Dirk Benedict In The 25th Century

Unfortunately this is only a preview and if I had known it was this short I wouldn’t have done a review of this. Unfortunately the clock demands I go through with the article so here we go. What we see is early scenes from the first issue, as actor Dirk Benedict saves a family whose shuttle is under attack in the future. Then we flashback as Benedict is signing autographs and hitting on a reporter while a man claiming to be from the future runs around asking for help. One of the attendees (in a Batman costume) thinks he’s nuts but suggests Benedict due to his roles as Starbuck and Templeton “Face” Peck, and the confused scientist basically kidnaps him (accidentally bringing along the reporter’s cameraman) and transports them to the future, where robots threaten humanity Terminator style. The cameraman is killed but despite Benedict insisting he’s only an actor he manages to take down one of the robots as the preview ends.

Bluewater Productions did well enough with The Misadventures Of Adam West (reviews of which you can search for on this site as part of Today’s Comic, back when I had new comics coming in regularly) that they decided to branch out with other actors, including Julie Newmar. The concept is that the actor is for whatever reason sent to worlds resembling shows and movies they’ve been on and taking on the lives similar to characters they’ve played. While I don’t know if Benedict is really that much of a ladies man in person or how often he smokes cigars his personality in the comic is closer to Starbuck’s than Face’s though without the sell job of either character.

The art is okay. Dirk looks a little too close to Liefeld’s Galactica version of Starbuck but with Benedict on board and one of the writers he looks closer to the actual actor because of course they have permission for the likeness. As far as the concept it is an interesting idea but I’d have to see more to comment on the actual execution. Sorry, Munroe, bad choice of words…but what footage you got before the robots killed you…and blew up the cam…you know, never mind. At any rate it’s hard for me to recommend it based on this preview but I would be looking into it for the concept alone just out of curiosity, not so much for the sell of this preview. The preview images were nice but don’t really tell me if the book is any good. So if you like the concept maybe look into it.