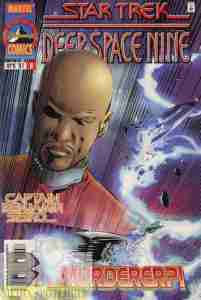 “Me? That was clearly Thor!”

While investigating a space/time anomaly the Defiant accidentally interrupts a time travel experiment by the Shirn, seemingly killing a pilot. Sisko gets them agree to let him take the trial and punishment alone, but one of the scientists tells Dax that not everyone of the Shirn was in favor of this experiment and the science group is looking for a scapegoat to push blame away from them. O’Brien finds evidence that the pilot may actually be alive shifted out of time but the project head, Koth, refuses to believe, so O’Brien puts himself at risk to prove it just as Sisko is declared guilty. The punishment: a life for a life.

What they got right: I like the plot of the story. I’m not really sure what I can point to specifically because the story and character just work too well for the plot.

What they got wrong: Though it is a bit odd to me that the Defiant is going on exploration missions when it’s a defensive ship. It seems something more in line with what the Enterprise would be doing but I do like seeing how these characters handle the situation so maybe it works best for the DS9 crew?

Recommendation: if the story ends as strongly as it starts this will be a good story to pick up. We’ll see what happens next issue. (I hope I have the next issue.)