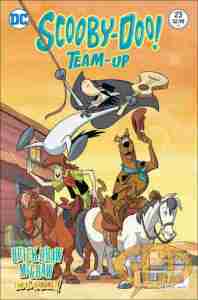 Nice to see Shaggy and Scooby smiling on a cover instead of running in terror. It’s a rare treat.

DC Comics (April, 2017; as posted to comiXology in the vol. four trade)

The gang head to Gopher Gulch when they hear a ghost is robbing the town, and meet the sheriff, Quickdraw McGraw, and his deputy, Baba Looie. When the ghost nabs Quickdraw’s gear he mysteriously disappears so that local masked hero El Kabong can take his place. (Nobody’s fooled.) Together they learn that the criminal the Some-Trance Kid has put a whammy on nearby sheriff Ricochet Rabbit, but with the help of Ricochet’s deputy, Droop-A-Long Coyote, and a bit of el kabonging, Ricochet is freed and the three groups team-up (like the title says) to finally bring the Kid down.

What they got right: This time the gang are actually helpful…well, more than the previous issue anyway. Fred gets hypnotized into thinking he’s a chicken, which was fun. And of course it’s a fun team-up with Quickdraw McGraw and Ricochet Rabbit, two of Hanna-Barbera’s Old West comedic short type shows.

What they got wrong: Since Ricochet’s deal is that he’s superfast (and bounces off stuff, hence his name) and has those trick bullets, how was he able to lift a jail? And why steal a jail except for the gag? And since there’s nothing else to complain about, the whole ghost thing is just an excuse to get Mystery Inc out here because what they do could be done by others except for Shaggy and Scooby’s method of ruining Some-Trance’s illusion.

What I think overall: Fisch may not be making good Scooby-Doo stories but he’s telling some nice adventures with the other HB characters. That’s really the only reason to read this series, which is still a step up from what DC did with Scooby-Doo in the other titles. (Unless you liked Scooby Apocalypse, but that wasn’t really normal Scooby fare either.)