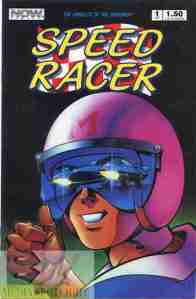 No joke, the headlights on the Mach-5 being where Speed’s eyes should be is a nice effect.

“Death Of A Racer”

The death of Rex Racer was deemed an accident, though we the readers see he was actually run off the road by bad guys. This puts the Racer family in debt since they sunk all of their money into their race car, the Mach-5. The now elder brother, Greg, believes he can race the Mach-5 but nobody believes him…until he barges into a qualifying race and wins. The Colonel sees potential in the lad, who has taken on the nickname other racers taunted him with…Speed Racer!

What they got right: Rather than simply adapting the manga or anime NOW Comics decided to go with their own continuity. Rex will become a government agent, hence the “Racer X” bit, they try to explain why a dude named Speed has a G on his shirt (his original Japanese name was “Go Ifume” with the manga titled Mach Go Go Go), but still keep the relevant parts of their characters intact. While the art isn’t as polished as the bigger names the characters resemble their Japanese counterparts but rather than try to replicate the Japanese art style like Comico did with Robotech the artists here draw them in a more Western style so they look like the artists know what they’re doing.

What they got wrong: I’ll forgive them for making Speed a nickname, but its not like he needed to have the G on his shirt. When Fred Wolf made The New Adventures Of Speed Racer they just took off the letters that didn’t fit the character names. In fact the racing team was still called the Go Team or something like that in the original English dub of the anime so that would have worked. I also don’t think Rex and Greg had to be adopted, and Spridle (THAT name they kept) is also adopted but not Greg and Rex’s biological brother. That’s not a necessary change at all. And why is the “Colonel” designed like Colonel Sanders?

What I thought overall: As an American reboot of a foreign property I’ve seen worse. (The Fred Wolf show, while I personally liked it, isn’t that great an adaptation, even ignoring rights issues that even Hanna-Barbera worked around with Godzilla.) I only have a few issues and one of the Racer X spin-off series and we’ll be going over them over the next few weeks.