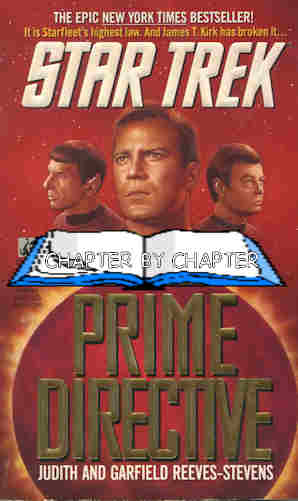 Chapter five is kind of short for the chapters in this book, only seven and a quarter pages long. It’s just barely long enough to qualify and the next chapter takes place somewhere else with a different group of our cast…and now I’m wondering what Uhura and McCoy are up to. They’re the only ones we haven’t checked in with, and yet this chapter is back to Spock and the next one is back to Chekov and Sulu. At least last chapter we caught up with Kirk.

A quick skim says we’re still not at the Prime Directive debate I’m expecting, so the question will be whether or not this chapter even matters. Will this move the plot, explore what Spock is thinking, or introduce his unknowing partner in crime? If so then this chapter may serve a point. If it does none of these things then it better find a way to not be a waste of page space for a book and story this long. So let’s dive in and find out.

We catch up with Spock hanging out with Marita’s group, the Students For Stars For The People, a group who (if you don’t remember) believes that the Prime Directive should be done away with and we should all go say hi to the rest of the universe whether they’re ready or not. I’m keeping a few things in mind in case the debate I expect happens. we meet Penn, Marita’s…I guess boyfriend and I’m only guessing the baby’s father. They’re depicted as typical college students with messy rooms and radical ideas and whatnot. Penn’s is also not very trusting of Spock’s motives, something shared by only one other member of the group, and it’s not Marita. They may be right. Spock clearly has other motivations, which is alluded to in the narration discussing Spock’s thoughts but nothing is really explained yet. They’re saving that for later.

They’re waiting for a guest that is supposed to help with the cause, and it turns out to be Richter. We know from part 2 that he has his own doubts about the Prime Directive despite being the creator of the scale used to determine when a civilization is ready to learn “we are not alone” and stuff. Meanwhile this group hates the whole thing, though in his head Spock brings up why the Directive exists, to keep the Federation from making the same errors as explorers in Earth’s past. If you don’t know what I mean, you haven’t been following the Christopher Columbus debate, and that’s only one example. Remember what the TNG guide had to say about the Prime Directive.

THE PRIME DIRECTIVE PROHIBITS MEDDLING WITH OTHER WORLDS’ DESTINIES

There are only two possible exceptions to the Prime Directive: 1)When the safety of the starship is jeopardized. 2)When it is absolutely vital to the interests of the Federation.

Any Captain who finds it necessary to violate the Prime Directive had better be ready to present a sound defense of his actions.

Remember this for later.

We also learn that Spock doesn’t see the skies of Vulcan or Earth as “home”. He’s a man of space and one way or another he plans to get back there. I’m going to guess, and not yet aware of what Scotty has learned and the investigation coming from it, he plans to ensure Starfleet actually has to investigate what really happened that day, but we’ll see as the story moves on. We also learn that Marita is still going to school, raising a baby, and still taking part in the SSP. We meet a few other members as well, including the aforementioned Penn, and one of them is apparently “oriental”, a word I’m not used to hearing anymore and I do agree that it’s not an accurate label…but then I have issues with “Asian” and that’s not considered an insult despite the very same errors, just not in “old folks speak”. I was just surprised to see it used in this story. “Oriental” had basically gone out of fashion by 1990, and even with this book probably being written before then it’s an odd term to see in a 23rd century story. You’d never see it in a modern story.

So overall this was exactly what I hoped it would be. It gives us more insight into Spock’s goals and Marita (plus the addition of Penn shows that Spock was indeed messing with the ambassador) as a character while also moving the plot forward and going more into Marita’s group and their goal of ending the Prime Directive. Next time we check back in with Chekov and Sulu. I smell hijinks! Then again that could just be Krulmadden’s ship.