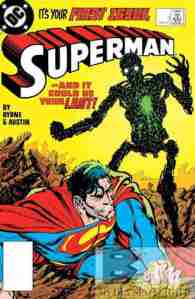 Well that was a short series. I thought this “Superman” had potential too.

This was the first comic after the events of Crisis On Infinite Earths created a new continuity, or as I call it, DC2.

INKER: Terry Austin (how do you have a “guest inker” on your first issue?)

Superman’s search for the spacecraft he came in leads to an empty lab and a dead body. However, inside the lab is a lot of information on him, so he hides the lab in space. Then, while Clark goes on a jog with Lois they come across the bank being robbed by a superstrong villain named Metallo. As the battle goes one we learn the dead guy was a scientist who was convinced Superman was an advanced scout from Krypton, a planet Superman only recently found out he was from. He found a man in an auto wreck and rebuilt him with a robotic body and powered by a chunk of radioactive ore from Krypton that he calls Kryptonite before Metallo killed him. (He was the dead guy in the lab.) The two fight and in the struggle police and press alike overhear the revelation of Superman’s origins, but just when the villain has the upper hand a shadow falls and something snatches Metallo. Could it be Lex Luthor?

What they got right: Metallo doesn’t get a great debut but he gets a decent one. We do learn his backstory, mostly through flashbacks but they seem to be triggered by what people say or other events. In this new continuity Clark wants to win Lois based on his own merits, not Superman’s. It’s also a decent way for his alien origin, which Superman himself only learned a few weeks ago, to get out, and he mentions other alien and alien-powered superheroes existing in this continuity.

What they got wrong: As a first issue for Superman, it’s not so good. I wasn’t heavy into comics at the time due to a lack of a way to get comics around this time and I wasn’t aware of the new universe. I think there was a Superman title prior to this one post-Crisis, as the captions mention events in Man Of Steel #4, but why wouldn’t your first Superman comic of the new reality be Superman #1? At least it fills in the gaps of this new take on Superman’s backstory.

What I thought overall: Like I said, Metallo’s debut is only decent as it kind of rushes through stuff. It’s an average Superman story overall, but it was an entertaining read for the most part. It’s just a bit disappointing as a first issue and a new villain debut (or at least new to the revamped timeline).