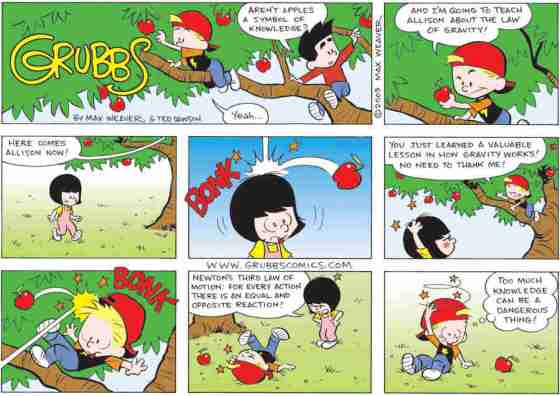 I didn’t think they were running out of comic books because knowing the storytelling pecking order in the entertainment industry I wouldn’t think webcomics would even been on the radar. And yet the Keenspot-hosted comic Grubbs is getting an animated series. Not that this article fills me with hope. Just on a base level Marry Me, another Keenspot comic mentioned in the article, got an adaptation in name only. One of the writers of the show worked with Sarah Silverman and the girls division at Mattel so based on today’s Hollywood I wonder how she’ll handle a little boy as the lead (and couldn’t Variety find a better picture?) while I don’t trust the modern entertainment industry to make a proper adaptation of anything. They saw something inspired by Calvin & Hobbes, knew they couldn’t get a show about that comic due to Bill Waterson’s history, and decided to do what they do with ideas that are more about marketing than storytelling.

I hope to be proven wrong but history has shown this may no end up that good. Not that I can see what the comic originally was since there doesn’t seem to be a home for the comic anymore. You can only get it by buying books so it’s not even a “webcomic” anymore, it’s a physical comic book series. The only site I could find apparently sends red flags to my internet provider and they won’t let me use it. The sample image came from another website. So what started out to be a celebration turned into my trust issues when it comes to the modern day (alleged) entertainment industry getting worse.