It’s quite possible that this site will end before I get too all the issues of Masters Of The Universe or Super Powers Collection mini-comics get reviewed. I do have other things I’d like to do someday like making my own comics, though if my art doesn’t improve enough soon I’ll have to find an artist for my ideas. Too bad I have trust issues and am a control freak about my stories but now we’re getting off topic. Point is this the first series to end that wasn’t a multi-comic review. I think. I’ve been doing this series for a while.

For those you who haven’t been here Atari Force was a five issue miniseries that was sold through various Atari 2600 games. I picked up the first issue because my cousin didn’t want it but having an 800 instead I never got the rest of the comics. Lucky for me Atari Age is here to deliver. The story takes place in an alternate future where war has separated the United States…which is becoming more and more believable given the current climate in the 2020s, and somehow Warner Brothers didn’t ruin Atari when they bought it and now it’s one of the companies trying to save the world. That’s even less believable. Project: Multiverse is an attempt to travel to other  universes to find a solution to the world’s various problems. Instead they’ve gone up against evil aliens, picked up a not-Pokémon, and our hero is trying to figure out why his old friend now treats him like they just met and she isn’t happy about it. For more, here are reviews for issue #1, issue #2, issue #3, and issue #4 as this is a continuing storyline. Now that we’re all caught up let us end this miniseries. 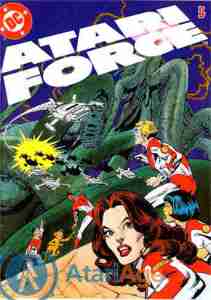 “Quick, let’s form Activision so they can forget why they were created decades later and become worse than as Warner’s Atari!”

I’m amazed when famous names are seen on these minicomics when they’re starting out. I’m even more amazed when they’re seasoned professionals still working on these projects and they’re actually decent to good, like they care about their work.

After the captions tell us this is their final mission we see Martin Champion and Lydia Perez fighting a giant worm. This could be a short comic. Li-San O’Rourke wants to ready the laser to save their friends but Lucas Orion, who is supposed to be Martin’s best friend before this all started, doesn’t want to hurt the creature because “we’re the invaders”. Doc, I know you’re a pacifist with good reason to be, but at least pretend you’re worried about your comrades. Also out there are Mohandas Singh and Huuka, the latter being the not-Pokémon I mentioned. Singh’s backpack malfunctions and he crashes, but the creature is faster than the jetpacks as it is. The gravity is low enough that Lydia can carry Singh back to Scanner One but Martin is forced to kill the creature to save everyone…which makes momma mad. The ship manages to go back into multidimensional space before she demonstrates how mad she is.

Safe back outside the multiverse, Lydia begins to see this project as a failure. Twelve worlds thus far and not one of them is a suitable new home. She won’t talk about it to anyone. Martin is still disappointed that someone he once survived a crash on the moon with still treats him like a stranger but Li-San notes that some things take time, referencing her own Irish/Chinese heritage as proof how difficult the human soul can be to understand. I don’t know how that fits into the conversation. It sounds more like Li-San, who is missing the Irish dialect from her early appearances, just likes bringing it up. “Can you pass the salt the same way my Irish father passed it to my Chinese mother?” I realize not everyone bought the other games and maybe they just really wanted the home version of Galaxian, but even Superman knows not to mention Krypton.

We then see Lydia looking at a 3D picture cube of her family and talking about not wanting to lose anyone again. I hope this is the issue that finally explains what her problem is because…there isn’t a sixth one and the ongoing shelf series is about a new team. 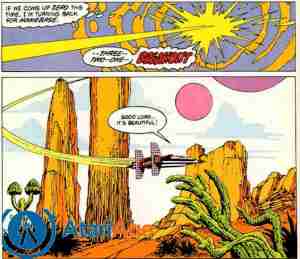 No, Martin, Breakout is not one of the games this series came with.

Two days later Martin has his own secret. If #13 is another bust he’s turning this car around and going home. This new planet they check out seems to finally be it. The water’s fine, the air good, the land pristine (that won’t last long), and the place is uninhabited. And then the inhabitants show up. Martin has to restrain Lydia, who doesn’t want to lose another one. Imagine if she knew this was homerun or strike out time. At least Hukka seems to like the lady. Aviar of Antairee is an appointed custodian of this world. She brings the group to the “Centerworld” to speak to the full custodian group. The team is ready to accept her because Hukka is never wrong about these things…despite this being the only ones other than themselves they’ve seen him meet. Maybe he’s just nice to everyone? Or she, since they apparently don’t know which and he only knows a few words. Curious how they’d play that nowadays.

Aviar tells the story of these First Custodians. Previously this reality (I don’t know if she means the planet or the galaxy) was in one huge war, with lots of dead people until finally the people decided they wanted peace so badly that their leaders had no choice but to give it to them. My gosh, Superman IV was right after all…except by “give it to them” the leaders just decided to kill each other because dang it someone was going to die tonight! Somehow, in a story about five people working for Atari traveling the multiverse to find a home for their people and ending up on worlds very loosely based on Atari games is the most believable thing we’ve seen in this story. Anyway everyone is so happy that Lydia even takes Martin’s hand…because all of a sudden they’re a couple now? What?

The crew comes to the Custodians’ planet, worried that they may not get approval to make that other planet their new home. Meanwhile, Lucas detects another lifeform from space and has the Atari 8000 computer look into it. That’s one more zero than my computer. While it analyzes the new signal our crew begin to disembark to the cheers of the crowd…that suddenly wants to kill them. I guess J. Jonah Jameson just put out a hit piece on them. “Atari Force: Threat Or Menace!” No, wait, this is a DC universe in the 1980s. They weren’t that stupid here. The crew make it back to Scanner One and take off as the Atari 8000’s analysis is completed. It’s the Dark Destroyer from issue #3. In a rare move for a comic story Lydia’s flashback to that story includes her spacing out and Martin has to bring her back to present day. Usually this is just ignored to bring new readers up to speed. Odd that this where we’re breaking this troupe. 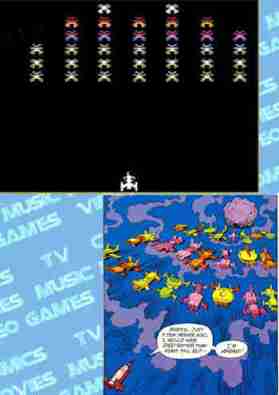 The Custodians’ ships take position in front of the Destroyer in the same position as the playfield of the game it came with. Only this time to defeat the Galaxians (a name Lydia calls them completely out of nowhere) you can’t destroy them. Luckily they damage the ships and the Custodian/Galaxian pilots safely eject. It turns out that it was the fear the humans had they lost another change at finding a new home that allowed the Dark Destroyer to awaken, since it feeds on negative emotions, as it explains to…nobody really. It also mentions that it can’t seem to control the human and prepares something in case it loses again. Guess what happens?

The Destroyer still can’t control the humans but one of the pilots is in the ship’s sickbay and it tries to use that one to kill everyone onboard, but the humans manage to destroy the Destroyer again. Maybe it should change its name to The Dark Destroyed? However, it does sneak off an “organic module”, I guess so they have something to fight in the ongoing series.

Well it turns out that despite Earth’s recent history saving them from the ultimate evil proves they have potential and are given provisional permission to colonize the planet. Six months later Scanner One, now redubbed Exodus One, has a full crew of people in hibernation ready to start over again, thanks to the amazing Atari corporation. So be sure to buy all their video games and game systems so they can afford to save us all in a few decades! No, instead we got the Jaguar and now Atari is basically a marketing brand that only occasionally tries and fails to do more than be a retro library porter to modern consoles. In private Lydia finally admits to Martin about her lost parents and sister, I’m guessing between the time they met in the early days of the war and when they meet again in the relative present, and that she was afraid to lose anyone else. Martin tells her that it’s time for everyone to start again and he wants to start with her. Seeing as their son is one of the main characters of the ongoing series I’m guessing that worked out.

Yes, DC Comics would produce a full store shelf Atari Force series, lasting for twenty issues and even getting a crossover with Captain Marvel and the Marvel Family back when they could still be called that. I don’t know what happened in that series or what happens to everyone besides Martin, who is the hero of that story as well. In addition to Martin’s son the DC Database includes Li-San and Mohinder’s kid and some new characters in new adventures. I don’t have any copies of it but based on this miniseries it has potential. It’s strange to have a promo mini-comic not based on any one property but just the Atari brand go on to become a full sized comic series but somehow Atari Force managed to pull it off. The story was good with some great art. They’re all up at Atari Age and I hear it and the full series received a recent omnibus if you’re interested. We’re not done with Atari comics mind you. There’s still the other two Quest game comics to look at as well as two other video game adaptations packed with Atari ports, but that’s all in the future.

Next time if I can find it we’ll get to see what happens when they try to turn Wonder Woman into a magical girl. Yes, this actually happened.