“Yesterday’s” Comic> Space: Above And Beyond #2 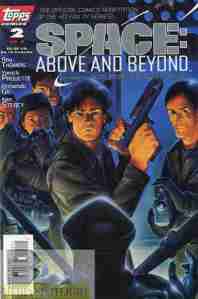 “I was just checking it out, honest.”

Space: Above And Beyond #2

“Mars Ain’t The Kind Of Place To Raise Your Kids…”

Our cast are put together into a training team but they aren’t getting along, Nathan and Cooper especially given their own individual issues at the moment. During a barroom fight a message comes on the TV. The government is aware of the fate of the two colony ships and Earth is now at war with an unknown enemy. On Mars, the group runs across a crashed spaceship from the enemy. A sniper manages to kill the only member of the team to treat Cooper as a person instead of an in-vitro but they do manage to capture one of the aliens. He makes a connection between something he’s wearing and Nathan’s photo of him and his possibly dead fiancé, but what to do with him is taken care of when the alien is killed by a drink of water. The squad is allowed to go home and Cooper (who of course has no family) has a conversation with another in-vitro who is a hero from the AI Wars. Rather than confront her sisters Shane agrees to go with Nathan to visit his family, but after the elite group the “Angry Angels” are taken out everyone is recalled. The enemy is coming closer to Earth.

What they got right: The personality conflicts are tied to the arcs of the characters and make sense for the world this story takes place in. They do have some action to keep things from being bogged down in the character moments and we get our first interaction with one of the enemy, a brief moment of (for lack of a better term) humanization for one of the enemy troops with understandable reactions from the Marines.

What they got wrong: I don’t remember if the episode had time to see Nathan interact with his family but the comic definitely doesn’t. I had a hard time following who was in what spacesuit because they look so alike and it’s only up close that you see their faces or the names on their helmets.

What did I think overall: While this isn’t what I’m looking for in a sci-fi war story the story itself is pretty good, even if this felt a bit more truncated due to translating a three episode “movie” into a three issue comic. Also, they really don’t know what rock music or Pink Floyd is in 2063? I’m not even a fan of their music and that feels wrong.

Posted by ShadowWing Tronix on March 18, 2022 in Television Spotlight, Yesterday's Comics and tagged Space: Above And Beyond, Topps Comics.