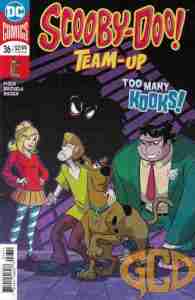 DC Comics (May, 2018; as posted as the final story in volume 6 of comiXology’s digital trade)

A monster sighting at a telethon brings Mystery, Inc as well as private investigators Angel and the Ape and superheroes The Inferior Five (Angel’s sister is Dumb Bunny, one of the heroes). The monster turns out to be pretending a dog to a boy named Stanley but is actually a nice monster. Then two of the workers at the telethon try to blame the monster for a theft of some of the money but they’re chased off by what they think is a ghost, but actually turns out to be two toddlers named Sugar and Spike. Before we continue I need to just make my life easier and add this indexer note from the Grand Comics Database.

In addition to the featured guest-stars, Sugar & Spike (from their own series), The Maniaks (from Showcase #68, 69 & 71), and parodies of long-time DC stars Jerry Lewis (“Louie Jervis”) and Bob Hope (“Rob Pope”) make appearances.
The Maniaks are performing a song they sang in Showcase #68, a parody of “Take the Last Train to Clarksville” by the Monkees.

Other acts announced at the telethon but not seen include Lando, Man of Magic (from the earliest issues of World’s Finest Comics) and Goody Rickels (a parody of insult comic Don Rickles from Superman’s Pal, Jimmy Olsen #139 & 141).
Seen taking pledges are Windy Wiggs and Willy Newton (from Windy and Willy), Scooter (from Swing with Scooter), Binky Biggs (from Leave It to Binky), and Debbi Anderson (from A Date with Debbi). Also, Stanley’s Monster Spot mentions preferring The Flips, who appeared in the Teen Titans try-out in Showcase #59, to The Maniaks.

Mr. Nelson and Mr. Arnold are named for E. Nelson Bridwell, creator of Angel and the Ape, the Inferior Five, and the Maniaks; and Arnold Drake, creator of Stanley and His Monster and long-time writer of DC’s Jerry Lewis and Bob Hope comics. Another in-joke involves Sam Simeon and Merryman trading compliments, comparing their work as cartoonists to the artists primarily associated with Angel and the Ape (Bob Oksner) and The Inferior Five (Mike Sekowsky).

What they got right: If you wanted to see all those characters, well there you go. No wait time, and they do look interesting in this pseudo-Hanna-Barbera style Brizuella and Franco are going for. The various cameos don’t detract too much from the story.

What they got wrong: Partly because there isn’t a story to detract from. The robbery seems to be shoved in just for the characters to have criminals to bust. Otherwise it’s just a bunch of Silver Age kids comic characters hanging out. I would have prefered a straight up crossover with Angel And The Ape and been done with it. I guess with Dumb Bunny being Angel’s sister having them cameo would work. Stanley’s lisp is a bit hard for me to deal with but having him be the nephew of not Jerry Lewis just seems to be an excuse to have him there.

What I think overall: If Fisch just wanted to do a team-up of Silver Age kids characters, fine, but they wouldn’t mean a lot to a good chunk of the readers, especially the kids. Without the index I wouldn’t have even known about the cameos and I only know the actual characters in the story because I’ve been into comics long enough to know some of the history. (Plus I did a Jake & Leon comic using Sugar and Spike in a commentary strip about the New 52.) What you end up with is just a mess of characters messing around and a theft thrown in just to have crooks in a Scooby-Doo story, and even then it’s more like something out of those other comics. The end result is nice for nostalgia or history but not exactly an exciting read.