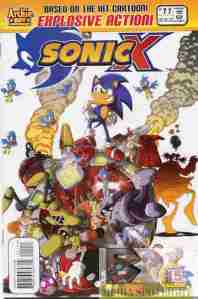 Cleaning services are in high demand these days.

“No Thanks For The Memories” part 2

Sonic and friends continue through Eggman’s virtual reality video game, collecting more of their friends along the way. Once Eggman has collected enough energy from their battles he’ll used it to send the team to the moon, which he’s planning to destroy. What he didn’t count on, besides Bokkun eating all his ice cream, is Chris and Uncle Chuck finding where they’re held and rescuing them. Eggman lost this one, but there’s still the whole blowing up the moon plan.

What they got right: It’s not a bad explanation as to why none of them have the abilities that came with the later games like Amy’s hammer. As a tribute to the first game on its anniversary it works.

What they got wrong: I thought Knuckles could climb in his first game appareance? I’d have to replay the PC version of Sonic & Knuckles. Maybe I’ll even beat it this time.

What I think overall: This is the first storyline I actually enjoyed in this comic. Maybe the rest of the series will be good, or maybe this is a fluke and we’re back to the uninteresting barely matching the show stories we’ve seen thus far.