Joe Quesada’s Exit And The Future Of Marvel

So this gave me something to write about today, and on the day I review Marvel comics for “Yesterday’s” Comic.

And now for something completely different… pic.twitter.com/5Vurcra9kJ

Yep, Joe Quesada is leaving Marvel altogether. Some of you probably thought he left when Axel Alonzo took over as Editor-In-Chief of Marvel Comics but he was actually moved to Chief Creative Officer, because the more corporate Marvel gets the more job titles are created out of nowhere. Now he’s going on to personal pursuits and original ideas rather than the questionable decisions he made with the old ones.

I found out about this from the below video by Comics By Perch discussing the early noon news. Of course we can’t really know where Marvel’s future is just yet. We just got this word and we don’t know if Disney even cares enough to alter the direction of the company they bought just to have more movies and merchandise money coming in. We can speculate on one thing though, and I don’t think it’s time to declare the problems at Marvel over.

First off I want to repeat an old Jake & Leon comic from when Quesada was replaced by Alonzo. 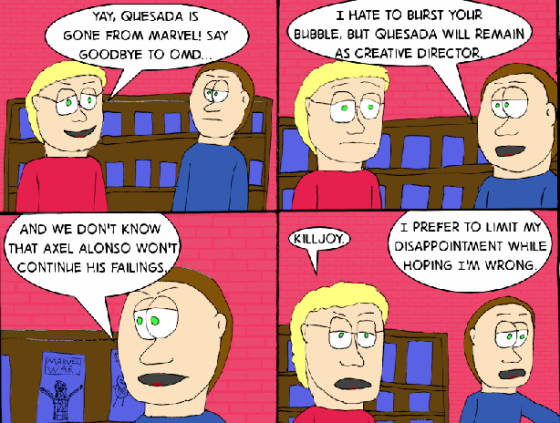 Sometimes you need a defense against disappointment.

That was all the way back before my art improved and still had the orientation longways. So this was a long time ago. This was strip #53. It turned out Leon was right. (For those of you who don’t read my comic, that’s not Jake he’s talking to. Should I give Leon green eyes again? I’ve been considering bringing eye color back.) That’s back in 2010, over ten years ago. As it turned out I was right. One More Day is still the law of Spider-Man’s relationship. He and Mary Jane were never married thanks to Mephisto, and MJ’s character was damaged as part of that deal with the devil.

But Mephisto isn’t the devil.

Otherwise…you know what the term means so stop splitting hairs trying to defend selling your marriage to the embodiment of evil.

Not only am I expecting a ton of commenters declaring the upcoming end of this deal, and in fact looking through the comments of the tweet that’s already started, I’m expecting them to point to this or that scene that they already thought would undo the deal in the belief there are writers wanting to fix this mistake. Quesada said as long as he had the power he would never allow Peter and Mary Jane Watson to be married, claiming it aged the character or that it wasn’t believable for a guy like Peter to snag a hot model/actress wife, even though she started that pursuit after they were wed. Instead he wanted to see more of Peter failing at love and happiness, believing being an unlucky loser was part of his character, not something he outgrew or just happened as a result of his responsibilities as Spider-Man. So mere hours after Quesada announced he would no longer have that authority people were already cheering on the undoing of One More Day.

Don’t count on it, folks! 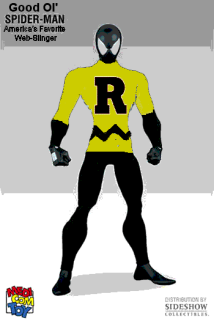 A combination of Charlie Brown with classic Archie. That was Quesada’s Peter Parker.

Joe Quesada wasn’t the only one who hated the Spider-Marriage. Remember the 90s? Remember WHY the Clone Saga existed before corporate thought extending the storyline would bring more money instead of intense scorn? Quesada wasn’t in the upper offices then. Quesada is just the guy who decided to use his power to make it stick when all the Clone Saga did was give more time for fans to demand the real Peter Parker stay Spider-Man and defend his marriage to Mary Jane. Instead we got Carlie Cooper, named after Joe Q’s daughter, dating and living with Peter for a time. Quesada may not have cared what fans wanted, and even fans who joined in not liking the marriage hated the way One More Day went about it, but what makes you think his replacement is going to be any more interested in ditching the deal or even just straight up remarrying them? He didn’t create the Spider-Marriage hate, he just forced his view into being. Disney keeps giving us young Peter so they may not want to “age” Peter either, the main reason given by the anti-Spider-Marriage writers for wanting to undo it.

Oddly nobody mentioned his Eventitis affliction. The Spider-Titles had a bunch of events, there have been two or three Civil Wars within the superhero community (and the Marvel heroes aren’t always best of friends on a good day), reality-altering events, and shaking up the status quo so much there wasn’t one for a long time and still might not be. While this has been replaced with tokenized replacements and other types of pandering, it’s also part of why Quesada supposedly brought Sana Amanat into Marvel, to turn it into a “lifestyle brand” rather than a superhero brand that happened to do other genres back in the day like Meet Misty or other Star Comics titles. Superheroes and horror were basically what made Marvel Comics, with sci-fi and magic as a close second. This “lifestyle brand” approach was contributing to Marvel’s downfall before the social preaching got involved and that has only hastened things, as the stories and iconic characters have been slowly downplayed to up the number of black, female, and gay characters without touching the actual gay, female, and black characters of the past or creating new ones because the “name” makes for better marketing.

So now we have the idea of superhero identities just being a “mantle” that any idiot can pick up and call themselves by. Secret identities are a dying art and I’m surprise with the prior attempts to out Peter that he or Miles have managed to keep theirs. Do you honestly believe that Quesada and only Quesada is solely responsible for all of this? No, and what he does take blame for seems okay with the people in charge. They didn’t stop him, might have even pushed for a bit more of it, and I don’t see this as a sign that any of this will change. Remember, Dan DiDio left DC last year and they’re still following his Darker DC plan of Future State and dark & gritty “realism” as well as the same token pandering.

I’m at the point where I don’t care which idiot is running Marvel or DC Comics. None of the replacements seem determined to undo past mistakes or course correct to make what the fans they chased off wanted. They just call them bigots and Nazis and pander to people who don’t read comics, hoping to win over the “cool kids” because they need that validation of a medium they don’t really celebrate themselves. Continuity means nothing, characters mean nothing, and the fans their predecessors cultivated before they even knew what a comic book was mean less than nothing because they just want sempai Hollywood to notice them and maybe lift them up the pecking order a bit. Speaking of things that will never happen?

{EDIT: Jamison Ashley at Bleeding Fool goes into more of Quesada’s failures at Marvel I didn’t even know about, including the X-Men and some backstage stuff I don’t usually cover here at the Spotlight.}

So yes, Joe Quesada is leaving Marvel Comics. Now convince me anything, including One More Day, is going to change. I’ll be over here reading stories from when the people in charge loved comics, wanted to continue their characters’ stories, and tell good tales (most of the time) in the genre they were designed for.

Posted by ShadowWing Tronix on May 31, 2022 in Marvel Spotlight and tagged Joe Quesada, Marvel Comics, Spider-Marriage.