Was It Really That Bad? (An Experiment) 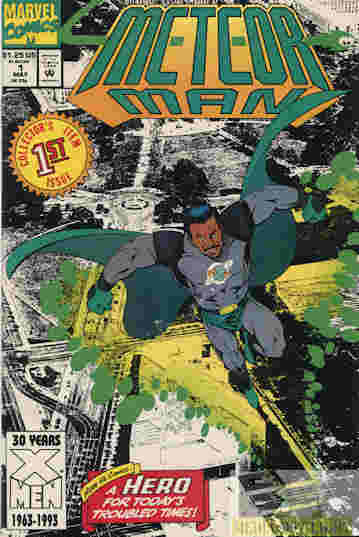 Forgive the clickbait-style title. I’m in a bit of a hurry today.

There are times I wonder if a good or at least decent production is thrown off due to one detail that gives the wrong impression. Obviously a bad adaptation can ruin a good story for fans of the source material that should have just been an original idea, but that’s something I admit too. Let me give you an example, Robert Townsend’s The Meteor Man was the first actual all-black cast superhero movie. It’s actually a pretty good movie. So why didn’t it do any better?

My theory is that Townsend around this time was known for his movie Hollywood Shuffle, which is still a praised movie, and a series of HBO comedy specials. Both were known for social commentary, mostly the treatment of black actors and characters forced to play their stereotypes, as well as rather raunchy humor. The Meteor Man has neither of these. Instead he wanted to give black kids a superhero they could look up to in a story that bypassed those stereotypes in order to raise inner city black kids up. This caused Townsend’s usual supporters to give the movie a pass and in my opinion this unwillingness to let Townsend do something other than raunchy commentary may be why the film never got a decent chance. It’s like when Seth MacFarlane created The Orville without the humor he uses in The Family Guy. the difference is MacFarlane got a better chance as Star Trek fans looked for something closer to the franchise they loved and weren’t finding it in CBS’s offerings.

So I want to try something with a certain Saturday morning cartoon that also is only known for one thing, this time being something it added that is the only thing mentioned. The actual story seems ignored by most internet critics, but I’m not going to say what it is just yet. I’m not going to list the character until I talk about the premise first. Then decide if my theory in something like The Meteor Man has some merit and we can be biased over silly things. (And no, screwing up the source material isn’t silly. There are reasons this material was popular enough to get an adaptation in the first place.) As a friend of mine used to say: “let me pitch it to you”.

Our show is about three Hispanic siblings. Yes, Hispanic people did exist on kids shows in the 1980s. They find a magic puzzle box that when solved unleashes a magic being that grants wishes. These kids must hide the being from their parents while navigating through life. Or the Sat AM version of it. However, the former owner of the puzzle box wants it back, hoping to use the magic creature’s powers to do bad things. (I don’t remember if it was specified. World domination is beyond this thing’s power if my memory is right so I guess theft and other petty crimes.) The kids must protect the creature from the magician and his flunkie (they always have at least one) and still help it adjust to our world. This being the 1980s “quirky” isn’t the norm. They’re all good kids who want to help their friend.

Does that sound like a good kids show? Sure. You have kids having adventures, some because of the crook who wants to abuse the creature’s powers, and whatever adventures and misadventures the three kids both dealing with the creature’s adjusting to our world and protecting him from the magician. This could be fun. Now, apart from that one detail at worst this would be ignored and at best praised for having a show starring three minority kids (they even got 80s kids band Menudo to sing the theme song) saving the day with the help of their little blue friend. So what’s wrong, according to the internet?

Yes, the show based on the Rubik’s Cube.

Yes, the show where a Rubik’s Cube comes to life when you get the colors to line up. Not that most kids would learn theirs wasn’t magical. Be honest, did you know this show even had a plot until just now? That’s presuming you knew this exists but now that you know and you know the actual story, had this been an ordinary creature in a puzzle box like it sounded like I was describing, would you have made the connection?

I don’t know who the chicken and who the egg are in this scenario but like Townsend’s different direction I think people today only trash this show because it’s a Rubik’s Cube…especially those would have prefered a Lament Configuration or whatever that thing is called. I don’t do horror. These are also the same cowards, and look who’s calling someone “coward”, who were scared by Teddy Ruxpin. Teddy Ruxpin. This thing.

If that scares you, what the hell are you doing watching Hellraiser?

The idea of a Rubik’s Cube coming to life sounds silly, but ignore that and the rest of the premise of the show is sound. Carlos, Lisa, and Renaldo are good characters (for 80s Sat AM granted). Some today may be disappointed that not all the VAs were Hispanic (Michael Bell could do any voice, even female ones, but the other two kids were voiced by Hispanic actors, one of which would also go on to do General Hospital)…but guess who voiced Rubik.

Yep, John Tra…no, wait, sorry, it was Ron “Horshack” Palillo, speaking slowing with his voice speed and pitched up. This gave Rubik his otherworldly voice. Nobody talks about that, either. Nope, all anyone mentions is the talking kids puzzle nobody can guess without switching the stickers or being really smart. It’s too bad. I actually remember enjoying the show as a kid. Then again, I just treated those cavity creeps attacking the city of Toothopolis as just another short adventure in between the main show.

Yeah, that one was a blatant commercial. This isn’t someone using someone else’s work as cheap marketing for the story they really want to tell with no concern for why something is popular. This is being willing to accept a silly premise for a still silly premise. Sometimes it is worth giving something a look. While some of these kids ignored a Rubik’s Cube coming to life, I enjoyed a magical adventure with three kids who didn’t look like me but were still kids I could root for and on some level identify with. The writers at Ruby/Spears took the concept of a show about a puzzle cube and said “okay, how do we make this work” rather than “this is dumb so why bother trying”. They were professionals who wanted to make a good show no matter how dumb the idea was. Apparently that’s too hard for writers today who grew up with those kinds of shows but can’t seem to replicate the idea. The world’s a funny place sometimes.