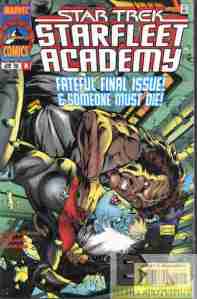 I know who I’m rooting for…but sadly she isn’t in the fight.

“Between Love And Hate”

Aboard Kovold’s ship, Pava tries to get revenge for Kamilah’s killing (though frankly she should be going after B’essa’al for setting it up out of her jealousy) but Kovold is acting out of bloodlust. There’s also a strange creature in a containment field, which turns out to be what’s left of Murg as he was genetically altered by the artifact. When he gains his senses he sends Pava to her shuttle and sends his ship into a sun, killing both himself and Murg while hopefully destroying the artifact. However, he warns Pava that something called the Viators are coming. B’essa’al blames Pava for Kovold’s death and swears her own revenge. All this an adult Captain Edam Astrum tells a girl named Fatimah, but her aunt Pava will have to tell her about that crisis. This comic is over.

What they got right: On it’s own, and had the series continued, the story is quite good. There’s a lot of action, some decent setup for future adventures, and the First Cadre rivalry proves to be good storytelling fodder. Introducing a girl named Fatima, who in the possible futures attached to First Cadre’s first appearance was the daughter of Kamilah, is intriguing, and the title of this story is based on that story as we see what the possible future might be. Having the hologram of Kamilah from Pava’s memorial locket come between her and her target, which proves to be a good thing Pava didn’t kill him just then, was a nice moment even if the hologram of her head seemed way too large compared to memorial holograms seen in Star Trek previously.

What they got wrong: However, it runs into the same issues as Monday’s “final issue” story with Robotech: Aftermath, though thankfully not as bad. Outside of framing elements the story itself stands alone okay. However, hinting at these Viators is another example of “gee, if they didn’t cancel the series you might get to see this happen wink wink nudge nudge”. If you knew this was the final issue you have only a little tweaking to do and just give us the unsatisfactory continuation rather than resolution to First Cadre since this series wasn’t picked up by future licence holders either (too bad in this case). It still wouldn’t have been the ending we would have liked where First Cadre, especially B’essa’al since Murg gets mutated and Kovold was a pawn/prize in these proceedings, but teasing what isn’t coming never makes for a proper ending.

What I think overall: Had more issues been coming this would have been a good issue. As a finale it falls a bit short though. I do recommend checking this series out though.