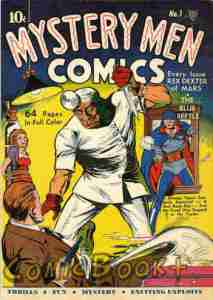 I think I’ll stick with my surgeon.

WRITER/ARTIST: Dick Briefer (apparently Comic Book Plus isn’t sure about that credit)

Billy Bounce: “How To Be A Detective”

Zanzobar The Magician: “Trapped At The Top”

The Blue Beetle (finally): no title

WRITER: Will Eisner (though Comic Book Plus isn’t sure)  ARTIST: Charles Nichols

WRITER: Will Eisner (again, not sure)  ARTIST: Bob Powell or S.R. Powell (also not sure)

Captain Danny Scott: “The Valley Of The Dead”

Grab a seat, folks. This one is going to take a while, but if you want to get to the Blue Beetle story you’ll have to scroll down pretty far. I marked the paragraph.

In our first adventure, the Green Mask (apparently not his first appearance but my initial plan was to follow the history of the Blue Beetle–I may go back to the rest of the Fox universe later but neither of the Golden Age scan sites I use is easy to get the chronology right) and his reporter friend “News” Blake take on an insurance fraud scam. If the victim survives the mob locks them away and still collects the money. Eventually the Green Mask and Blake’s investigation takes them to the mobster…which is where it should have stopped. For some reason the writer then has the mob boss working for a corrupt politician. I don’t know if he had space left or what because this is brought up only in the last few pages. It doesn’t ruin the story, which was pretty decent, but it feels like an unnecessary tag-on.

Try to follow along with this next one: In 1939 a rocket was launched from the World’s Fair towards Mars, piloted by Montague Dexter and his wife, but the ship crashed. With no way to get home or even tell Earth they survived, the Dexters were cared for by the Martians until the year 2000 where their son, Rex, returned to Earth to establish peaceful relations between Earth and Mars. Earth now has their own spaceships and warmly welcome the Mars-born Earthling (especially a girl named Cynde who was on the Earth ship Rex crashed into). However, Boris Thorax wants to get slaves for his friends on the Moon (who are also not human) as well as having people to rule after Eastern Europe fell during the wars in 1950. He tries to drop a planet (not one of ours) on the Americas but Rex and someone else just barely saves the world before the story ends. It’s like this one has the opposite problem of the last one and didn’t have enough pages. (Maybe Frehm should have given him a couple.) The end result is that the story has a rushed ending, and nothing about it will hold up to today’s sci-fi reader.

The next two pages features a “kid detective” out to find his first crime…and ruining a movie “murder”. Told to find a costume to help the picture…yeah, I don’t get it, either, Billy Bounce takes clothes he finds (because the dude was swimming) but has his own clothes stolen by a little person criminal hoping to pass off as a kid…but he didn’t save his mustache. This story was meant to be the comedy case these anthologies tended to have but it’s just dumb.

Well, you’re going to hate this one if you hate 1930s racist depictions of Chinese people. Look, I don’t have a problem with a Chinese villain crimeboss. That’s not my issue with Fu Manchu style characters like Chen Chiang here. But even I found this hard to read, and only partly because this thing jumps from even to event like it has ADHD. Chiang has the references of Richard Kendall stolen to keep him from working on a bridge Chiang wants to destroy, so Kendall is given a job as a detective for the building company. What follows is a series of fights, Kendall being kidnapped, Chiang faking his death…there’s just too much happening. Throw in the stereotypes of the period for every Chinese villain in this story and I know what I’m not looking forward to in the next whatever issues.

Air detective Wing Turner is the star of the next story as his plane is forced down by crooks…but the gold is fake as this was all a trap to capture the villains. So we have a story that fits it’s page time and isn’t terrible. Nice to have both.

Every comic universe has their strange mystical hero at this time and Zanzibar was apparently Fox’s. Mob boss The Top forces him to take part in a bank robbery but he manages to turn the tables and the Top ends up killed by his own men. The story technically fits the page time but it isn’t very interesting.

The other gag comic is Hemlock Sholmes (no connection to the former Sesame Street Muppet) and his partner Dr. Potsum. I’m acknowledging it exists but this was the dumbest thing in here, and I just suffered bad Chinese stereotypes. Just skip past this part.

After a text story by Will Eisner (this is a comic review and this one is going way too long, but it amazes me how much you used to get for a dime) we meet the Waco Kid as he tries to free a town from the control of criminals. He doesn’t even save the day. A bank manager gets killed and gunmen found by the one guy he nursed back to help have to save him from being hung. It…was a story anyway but at this point I was getting bored waiting for the comic I came here for. That’s on me to a point but at this stage I just wanted to get to the Blue Beetle’s origin already. Kind of interesting that the only character to make it to anything resembling prominence from this book is down so low and with so few pages.

Next up: Inspector Bancroft of Scotland Yard deals with a traveling bomber, who turns out to be a corrupt official seeking revenge after being sent up the river. It’s a decent enough tale that makes good use of the short page count, but if CinemaSins had a comic channel they’d have a field day with how the villains leaves our hero behind when he had time to kill him. Actually they’d have a field day with this whole comic. Someone bring up a ComicSins channel idea.

–>FINALLY we get to the character I came here for…and it’s quite fascinating. The Blue Beetle tangles with bank robbers who killed the manager and wants to force his daughter and secretary to give up the combination. The story itself is kind of meh. What’s interesting is how different this Blue Beetle is. Instead of his chainmail armor he wears a business suit. The name of his friend at the drug shop is “Abe” instead of Dr. Franz (though I guess his first name could be Abe), and his method of stopping the crooks is closer to the Green Hornet’s pretending to be one of the villains than just beating up the baddies. It’s not the Dan Garett from the radio dramas I’ve been listening to on my walks, which sadly I didn’t get enough of in this year, or the comic version I’ve heard about.

Captain Richard Anthony, secret agent D-13, works to expose an espionage operation pointed at the Panama Canal. It’s a simple action story and while the standards have become low by this point it works pretty well.

Okay, we’re almost done here. Captain Denny Scott of the Bengal Lancers of I guess the Foreign Legion takes on a group of killers in Dead Valley. It’s…a story. You may be bothered by the Arab villains but unlike Chen Cheng that’s more your view since they don’t have time to be stereotypes, just killers that Scott takes down with a landslide. Location of your criminal headquarters is important, as is maintaining the area so one lone Lancer can’t drop a huge rock on you.

Our last story (about time) is Lt. Drake of Naval Intelligence. It’s another ocean sabotage adventure but this one at least is interesting. Drake goes aboard a targeted ship but the bad guys have a secret weapon…they have a hot girl on the team. Not that our all-American boy will be tricked by a pretty face. They even come up with an interesting way to disarm him in order to make the fight more interesting.

Overall though this comic was a bust. Most of the stories were meh to bad, there may actually be too many stories so none get a hold, and when it’s all said and done I can see why the Blue Beetle, after an alteration, is the only character to be worth remembering. Even the Green Mask doesn’t get much to shine with while the detectives and lancer weren’t going to make it far in comics. I don’t think I’ll be reviewing the rest of this series. I came to see the Blue Beetle’s debut and I did. Next week we’ll just go right to his solo series.