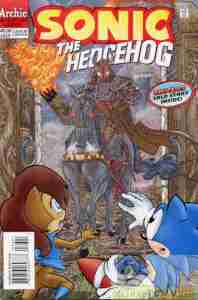 Knuckles: “A Sense Of History” part 2

In the main story, Rotor finds the real Zone Of Silence just as Robotnik is messing with it. He’s actually trying to save Mobius because the Zone is trying to merge with their universe. Sonic is forced to trust his enemy as he, Sally, and Antoine journey into the Zone to set the device that will protect the barrier, but battle a knight who turns out to be the lost king Acorn, and Sally’s father. Now they have to get their amnesiac former ruler out of his trap, but for now the dimension is safe.

I don’t know. I don’t have a lot of those early issues (even then it’s in a trade collection that’s buried somewhere in my collection) but this feels like a retcon, especially given what we know of Penders today. We’ll see more of his worldbuilding in a moment. As it is the story moves too fast (you know what I mean) and that’s what it feels like, Penders setting up stories and what he wants to do with the Archie Sonicverse instead of actually trying to tell a story set in it.

That’s the problem with the back-up feature as well, leading into the Knuckles miniseries. Knuckles remembers more of his people’s early history, how his granduncle Dimitri had used a machine to absorb the energy of multiple Chaos Emeralds into himself, going mad with power and reprogramming their robot guardians into his army, now planning to do the same with the surface world. He didn’t count on fire ants working to free his prisoners or destroy his headquarters, Dimitri buried and seemingly killed as it collapsed. The Echidnas rejected all technology after that, leaving a few relics in an underground bunker, where Knuckles is sure his friends are being held by Archimedes.

Like I said, it’s all set-up history, which is better for a back-up story and it feels like more is happening here. Unfortunately this will all be tossed out after the incident with Penders that’s been brought up before, so I’m having trouble getting invested in this now. As I stated in that post, it’s tough to care about this series knowing the continuity is going to go crazy. At least with DC I have a decent ending point in each version of Earth-1 until current day’s nonsense so at least I can look back at DC-1 (pre-Crisis) and DC-2 (post Crisis) or divide the Golden and Silver/Bronze age continuities (Earth-2 and Earth-1) but there were directions I wasn’t happy with and then they tossed out everything due to Pender’s legal shenanigans and it just feels pointless.

Overall, this is a pure set-up for the direction Penders wanted to take things, away from the combined elements of both Sonic cartoons at the time and more towards his own thing, for good and for bad. It might be a jumping on point but that’s the best I can say about this issue.