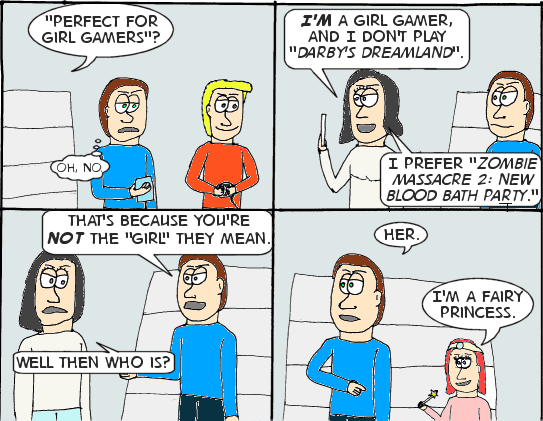 And here’s where I get the hate mail.

This one was inspired by an old “Morgan’s Minute” segment on the G4 Network. As a girl gamer, X-Play co-host Morgan Webb complained, if I understand correctly, that games which “targets” female gamers are an insult because plenty of “girl gamers” enjoy “boy” games, like Resident Evil. I also hear gamers (usually those that are part of the “everything for meeeeee” crowd) complain about these games because they’re too “girly” or some garbage. Personally, I don’t understand why these girls can’t have games that they would like. I wouldn’t play “Darby’s Dreamhouse”*, either. On the other hand, “Zombie Massacre”* isn’t my kind of game. So why should any taste not have a game of their own?

On the art side, I want to use up the Sharpie fine-tip marker up. One downside of trying to find the “perfect” art tool? Too many bloody pens taking up space on my pen and pencil holder thingy. And since the darkness of the art in my computer depends on how I scan it more than the pen used (even a pen that was dark enough), I could use that space for other things, like more versions of my chosen tool. I still have a lot of work to do to get my work area productive.