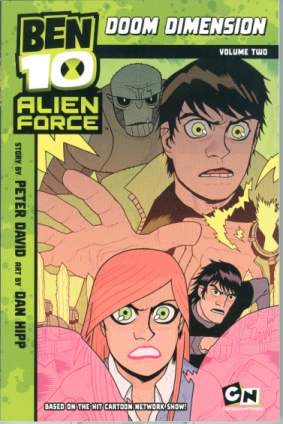 Yes, it took a while for the second volume to come out, and even longer before my funds allowed me to pick it up. So was it worth the wait?

When we last left Ben and the bounty hunter Aztak, they were trapped in the fourth dimension. Thinking Ben was dead, Gwen’s alien half was fueled by her anger and together she and Kevin went after the party they blamed: the Forever Knights. This volume features Ben trying to return to his friends as Aztak tried to convince him to leave with him.

My mind hasn’t changed about the art. Hipp’s aliens are still good and his humans still give me nightmares. (It’s the art style, not his skill. Hipp is a good artist. I just don’t care for his people style. I believe I compared it to the Gorillaz’s animated forms last time.) David’s story is good and Cartoon Network Action Pack writers take note. Here’s a story that doesn’t screw up the show’s continuity but still gives us a story with depth and action. CNAP just gives us a fight scene with no real plot.

I would like to see Peter David pen another Ben 10 comic, but, and no offense to Hipp, I would like to see him pared with a different artist. My recommendation would be Min S. Ku, the guy who does the Ben 10 art for CNAP, as he does a great job of emulating the look of the show and he needs a writer to match his talent.