For some reason this week I’m having trouble thinking of things to write about. So I’m grabbing another article from my other blog, The Clutter Reports. In this DVD review, I look at the DVD release of the animated version of the ALF sitcom. At least this takes SMC away from Liefeld’s Galactica for a while. (But it will be back, I’m sorry to say.) Is the ALF cartoon and DVD any good? Let’s find out.

I would show you the opening, but for some reason everyone who has it has embedding disabled (except for one guy on Yahoo but I guess they’re cancelling their video service or something in March). So here’s a link if you want to see it. They actually fixed it from the pilot version in the first link.

With the success of the sitcom, and the merchandising that came with it, NBC greenlit a prequel cartoon, set during the days the main character, Gordon Shumway, still had a homeworld. As the sitcom was getting a DVD release, the animated series was also released containing 9 episodes from the first season. 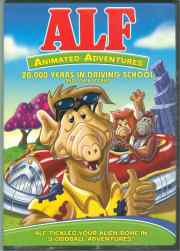 ALF Animated Adventures: 20,000 Years In Driving School and other stories

ALF Animated follows the adventures of ALF on his home planet of Melmac. To be more precise, the series follows ALF remembering his days on Melmac as he attempts to push an autobiography, “Melmac Memories”. I don’t think he ever found a publisher. The live-action segment would lead in to the episode, chronicling Gordon Shumway’s adventures and misadventures with the Orbit Guard, often protecting the planet from the evil Larson Petty. Then we’d go back to the live-action segment where we’d see ALF’s latest failure to find a publisher, having trouble with the typewriter (ever hear of those, kids?), or some other problem. Later seasons (released in a separate DVD I don’t own) would include “ALF Tales”, where the characters would put a Melmacian spin on classic fairy tales but no live-action framing.

We were also introduced to Gordon’s family, his parents, younger brother, and baby sister who idolized him. There were also his superior officer, Sgt, Staff (think Sgt. Snorkle to ALF’s Beetle Bailey),  his friends and fellow Guard members Rick and Skip and girlfriend Rhonda. (Skip and Rhonda actually cameoed in an episode of the sitcom while everyone else was first introduced in the cartoon.) Each episode was either Gordon somehow stopping Petty’s attempts to take over the planet or some other adventure from losing his hair to moving out on his own and other crazy situations that just happen when you live on Melmac.

The cartoon expanded on what ALF would tell the Tanners on the show about his planet, but I’m not sure if the cartoon was actually canon to the sitcom. There was however, a section in the comics, produced by Marvel kid-license imprint Star Comics, devoted to ALF telling them about an actual adventure, usually a parody of Earth culture. One odd thing, though.

If you’ve ever been to a sitcom taping or seen footage of a show after recording the episode, back when sitcoms were filmed in front of a live audience, the actors would come out, breaking character to thank the people who came to see the taping. This ending is an homage to that, but kind of adds some interesting questions about the show if you like to think too much into things.

The DVD itself is very bare-bones, much like the Action Man DVD I reviewed before. Only 9 of the 13 episodes of season one are on the video (including the title episode, “20,000 Years In Driving School”) and while I won’t go into reviewing each one you will note a difference in Fusco’s voice acting between the pilot episode (titled “Phantom Pilot”, I see what you did there, guys) and the rest of the episodes. In the pilot (as you saw in the first video link) Fusco appears to be doing a dry run, just reading off of the script. In the rest of the series, however, he must have gotten some serious VO training since now he delivers his lines just as well as he did in the sitcom. It’s a very obvious, and welcome difference.

Otherwise, outside of being able to choose an episode rather than watching the whole thing, and some trailers, that’s it. No interview with Paul Fusco, no look into the making of the cartoon or the decisions on why the Melmacian nose was so prominent a feature in the design of buildings and equipment, nothing. That’s disappointing, even if the show doesn’t have a huge following or history (at least compared to other series). I’m sure there were enough fans to do something with it.

Overall, it’s fun show (except for the Shumway’s pet bird, I hate that character like you wouldn’t believe) and worth at least checking out if you’re a fan of the sitcom or any of ALF’s other appearances like his recent attempt at a talk show on TV Land. It may actually be a tough DVD to find, however, since I found this one on clearance.