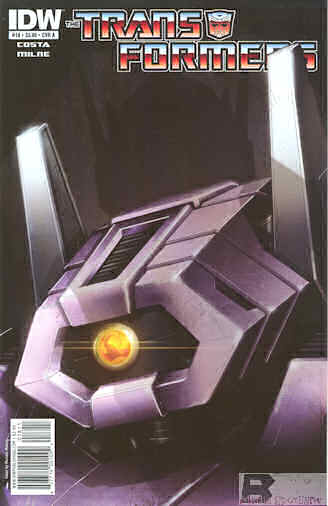 With everything falling apart around them, Optimus Prime learns where Megatron is. Using an idea of Spike’s, Prime gives the smackdown to the Decepticons, but Megatron survives and beats the Energon out of Optimus…and then surrenders to Skywatch. While in custody, Megatron tells Optimus about Spike’s assault on Scrapper, which threatens to break Autobot/human unity, which is Megatron’s true scheme!

What they got right: I’m still bothered with the continuation of the “humans hate Autobots as much as Decepticons” stuff, but Costa does a good job with it here. Jazz may not get away with killing the policeman last issue, and Megatron is playing everyone like a harp. He’s more like Beast Wars Megatron than the power mad sociopath G1 Megatron usually gets depicted as. Optimus is also a total badass, which I much prefer over Furman’s Grimlock.

What they got wrong: If this arc doesn’t end with a stronger human/Autobot bond, which would be different for any G1 comic universe, then I will not be a happy man.

Recommendation: This could work if done right. I’m keeping a close eye on this (well, duh, it’s me and Transformers) but based on past performance in this series it is difficult to recommend.

THIS is Optimus Prime!