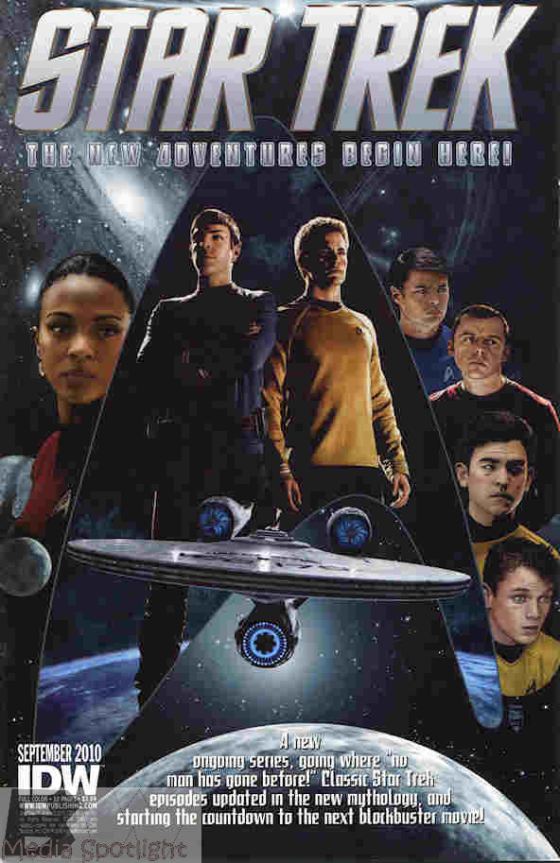 Now ask yourself if there are any lies in this image. Namely the taglines.

The new adventures being here.

…going where “no man has gone before!”

That’s a bit contradictory, don’t you think? These aren’t “new stories” but old stories with a new paint job. Namely, J.J. Abrams’ paint job. The question is whether or not there’s a point to it?

Whatever your opinion is about Abrams’ remake of Gene Roddenberry’s vision, and they’re certainly varied, on the surface IDW’s idea has some merit. What would the new episodes look like with this new version of the crew. The problem is…there really aren’t a lot of differences. Any changes are due to the new actors, not the characters or even the events. New Kirk may be a bit more full of himself, but he may have grown out of that by the end of the movie.

In this new universe (which the writers try to tell us is a splinter universe) Kirk gets command of the Enterprise differently, and Scotty creates a super transporter, but really nothing changed. Except for Vulcan being blown up, that is. Oh, and Kirk’s dad dies sooner leading to Kirk joining Starfleet for different reasons, Uhura and Spock start dating, but these are events. The characters themselves really aren’t that different outside of Uhura and Spock hooking up…and really, why the hell did anyone think that was necessary? What’s IDW going to do? A love triangle with Nurse Chapel who, in the original timeline, had her own designs for the Vulcan?

That’s the problem, there is no real change in the characters, and by the end of the movie they end up in all their classic spots. What are you really going to change? Let’s grab a few episodes that have been solicited and see if we can figure this out.

The images below, by the way, come from the official Star Trek homepage.

Original Story: Kirk’s best friend and ship helmsmen Gary Mitchell develops psychic powers and believes himself a god. Now a threat, Kirk must choose between a man who is like a brother to him or the universe.

What Could Change: Well, fixing the initial on his tombstone (the greatest showing of how little attention was paid to a somewhat minor yet important detail is when they gave him a middle name but didn’t check if his full name had been written or not), but otherwise what can you do? McCoy is there this time? So what? Kirk and Mitchell aren’t close friends? Kills the whole drama. Really, there’s nothing you can do.

Original Story: Seven crewmembers, including Spock, McCoy, and Scotty, are on a mission in a shuttlecraft when it is forced to crash on a planet. While waiting for help, primitives begin attacking the ship and threatening the crew. Spock’s logical approach doesn’t sit well with a number of the guest stars and Spock much find a balance between his logic and their emotions if they’re ever going to survive.

What Could Change: Again, nothing. I can’t even come up with a lame joke to make fun of how little they can change. Ignoring the fact that they jumped a whole bunch of stories, what even needs to be retold here? We haven’t really seen Spock and McCoy as confrontational in the movie because Spock and Kirk were too busy not getting along. New Scotty is a bit more upbeat, but I don’t see that being a major change.

In fact the only story that comes to mind that would experience a major change is “Amok Time“, the story where Spock needs to mate with his mate before pon farr burns his blood. For one, Kirk and Spock may be getting along, but are they as close friends? (Not if IDW jumps a bunch more episodes.) Secondly, Vulcan was destroyed in the movie, and although they could easily find a planet just as much of a desert, there weren’t a whole lot left. Finally, Spock doesn’t have a fiance (unless we want a love square now), he’s getting it on with Uhura (which would make that time where Greek god wannabes force Kirk and Uhura to kiss a bit more awkward). Problem solved. If anything this story would never even happen!

The thing is the characters are only minor changes from the originals because that’s how Abrams and the writers set it up at the end of the movie. Very little, if anything, can be changed, so I don’t see the point. Besides, you would think that most of the stories might NOT happen if these characters and universe is that different from its counterpart reality. It might have been better to do all new stories, and maybe homage events of other episodes, that would reflect this altered reality. Otherwise, this seems like a very pointless gesture, and I don’t see it lasting very long.