Haven’t done one of these in a while.

Over at Atop The Fourth Wall Linkara just completed a retrospective of his favorite DC team book featuring the Teen and non-Teen Titans. This included the comic that finally got him into becoming a superhero fan, JLA/Titans: The Technis Imperative. It kind of got me to thinking of the comics that got ME interested in the DC Universe although as I should have stated by now it was actually Super Friends that first sparked my interest there.

For my birthday one year I got one of those three-packs of older comics. This was a good way pre-comic store of getting back issues as there were leftovers from store shelves (in this case grocery stores or pharmacies) and being exposed to a random story. Now I’ve already reviewed one of those comics, Batman #307 reprinted as part of the “Retroactivity” specials, which helped defined how I view Batman, not as some vigilante fighting nut jobs (although the story does feature a psychologically disturbed villain) but as a detective who will help even come to the aid of the homeless. He can be spooky but also compassionate. It also features my favorite Batman moment of all time.

Hollywood has yet to capture the true awesomeness that is the Batcape!

Which is immediately followed by the guy just going back to sleep. At some point I may go back to this comic and do a more thorough analysis, if only to show why I can’t read most modern Batman comics. But my favorite DC hero has always been Superman. The second comic in the pack was not a Superman comic and the third was a Spider-Man comic that made no sense to me and proves that Snell’s (of Slay Monstrobot of the Deep) theory that any comic can be someone’s first has the occasional exception. (Although in its defense sometimes you have no choice for the sake of the story arc. It’s the risk you take.) Then again, I wasn’t as much into the Spider-Man cartoon as I was Super Friends.

The last one, and man this is a long intro for the front page, was an issue of Justice League of America. Like the Batman comic it was a Whitman comics reprinting and someday I need to look up why that happened. You’ve already seen bits of it in numerous Friday Night Fights entries, so here’s the full story if you were ever interested.

(I usually put this part on the front page but that was a long intro.) 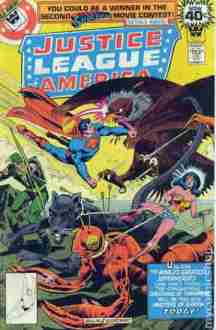 (I don’t understand how volume numbers work. I’m not sure they do, either.)

Our heroes are called to a STAR lab so secret they didn’t even know about it. Someone did, though, since they destroyed the place, stealing a genetic compound known as Compound-One. According to one scientist it can artificially induce a creature into a more evolved state. (Because comics told you to shut up.) After the Elongated Man finds an empty canister Zatanna attempts to use her magic to uncover the thief, only to suffer a brain zap.

Elongated Man and Red Tornado take Zatanna back to the JLA satellite and when she wakes up tells her what happened next. Green Lantern (Hal Jordan flavored) uses his ring to try to do what Zatanna was attempting and uncovers a lead that takes the other JLA members to the Miami Radiological Research Center in Florida. But before we go there we learn that whatever Zatanna was hit with opened a part of her amnesic mind leading to a mystery for the trio and our comic’s subplot.

Now I should note that none of these characters were on Super Friends so the fact that I was interested in these three shows how well they work the story but at the time I was more invested in the other group, even though I didn’t know who Green Arrow was. (He showed up in one episode of the first season, the only season my RU colleague the Cartoon Hero and I agree was bad.) So we pop in on the main plot as heroes arrive in Florida, only to be immediately attacked by a giant squid. Of course the squid has a yellow aura so Hal can get grabbed by the squid. Superman has already flown off after…something (maybe to get popcorn) and Green Arrow’s arrows are no match so it’s up to Diana to rescue Hal with her lasso.

Ollie and Diana are then knocked aside by something running at superspeed, followed by a dazed Superman, suffering from a brain blast but in his mind is the thought of an undersea Naval base. The group, except for the unconscious Hal (his natural state) who is sent to recover at the satellite, head for Deepsea Probe Proteus. If you’ve been reading my Friday Night Fights long enough, you know where this is headed. Namely, this.

“I told you I don’t want any encyclopedias!”

Hal’s going to be by himself, though, as the B plot moves to the old theater where Zatanna first woke up with her amnesia. Ralph finds an old poster of Zatanna and her father, Zatara, and an old photo of baby Zatanna and her parents. Or rather parent, since while there is space for her mother she’s not actually in the picture. Having had enough of this nonsense, Zatanna teleports everyone away to her old home. The mansion has easily seen better days and Red Tornado is picking up a strange magnetic field. Also the house tries to eat Ralph and then falls to pieces, with Red Tornado sacrificing himself to save Zatanna. Boy, they’re dropping like flies today. Now Zatanna’s really ticked off and uses her spells to chase off the evil force that was protecting the house, and the interdimensional portal within.

Back at the Proteus, our other trio wakens as a prisoner of the Shark, and old JLA foes thought defeated thanks to Wonder Woman’s using her magic lasso to order him to devolve. I’m not even sure how that works but I don’t have access to Adventure Comics #459. The Shark is now superevolved…somehow…and plans to create more of his kind using the Compound One. His first attempts involve a rat, an eagle, and a scorpion. The fight that follows I’ve already covered during the Friday Night Fights, and it still doesn’t make any sense now.

If you don’t want to click the link here’s the short version. The heroes start getting beaten down by the “Princes of Prey” (which I’m betting someone will name their metal or punk rock band if they haven’t already) until they start working together, forcing the superevolved animals back into the genetic chamber. Green Arrow is able to switch on the machine and because “evolution, like time, is a circular process” (and I’m still calling BS on that) returns them to amoebas.

Back at the portal, Zatanna is able to pull the person trapped in there out…Zatara! (Not that I knew who he was when I first read this.)

ANALYSIS: I had to grab a copy of the cover from MyComicShop.com because my copy is very well read–and faded thanks to time. And I still enjoy reading this comic. I like the action, the TWO mysteries involved, and even though the “circular evolution” bit is nonsense (even a creationist like yours truly can see that) it was 1979. Sometimes fun trumped science (whether you agree with said “science’ or not) and for the longest time I wanted to get the next issue to see what happened with Zatanna’s story arc. A one-shot story that is able to make a subplot to be resolved in a later one-shot story. That’s how you attract new readers, or at least me, to your universe.

I wish today’s Justice League comics were written like this but with Geoff Johns at the helm of at least two of them don’t bet on it. In his world heroes don’t get along even if they’re on a team, and fun is a dirty word. The art isn’t all glitzy but it’s darn good and doesn’t drop splash pages just to have a large art piece that pretends it’s sequential art. This is a comic that today’s writers and artists could take a lesson from and it’s one of my favorite comics.