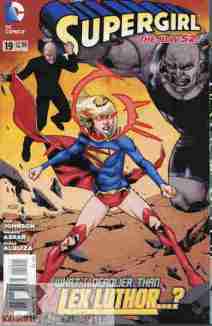 OK, I haven’t been reading a lot of the New 52, but what the heck happened to Luthor’s face?

Poisoned by Kryptonite (In events I haven’t read), Supergirl’s coffin is extricated by Luthor’s men (possibly, I don’t know) but is rescued by Power Girl. After battling the goons and one of Luthor’s underlings, our heroines head for Sanctuary (Supergirl’s version of the Fortress of Solitude) so Supergirl can be healed…although the computer can’t cure her Kryptonite poisoning. It can, however, attack them soon after.

What they got right: While I still don’t want Power Girl to cross paths with Superman and I wouldn’t have minded if she never met up with Supergirl, I do kind of like seeing them battling together. It was good to see Kara 2 (PG) open up a bit physically. I’ve seen some people who haven’t been happy with how Paul Levitz writes Karen in Worlds’ Finest but I don’t know that Johnson is better because we didn’t get to see much of her character here and she didn’t exactly have any time for flirting with guys anyway. I did like how the two versions of Kara kicked butt together, though.

What they got wrong: Kara 2 talks about Kara 1’s poisoning but acts like she was poisoned, too. Is it psychic, psychosomatic, or is Johnson aware of how the current WF story arc is going to end? There must be something psychic about one or both Karas, though, because they immediately swap backstories telepathically just by touching hands. I also wonder why the computer took so long to go crazy over two Karas. Because one needed medical attention? I don’t know how Sanctuary works. And to end on a personal gripe, I must be the only one who prefers Power Girl’s New 52 outfit because Johnson decides she needs to be in her classic suit, without the symbol they gave her (which I like her having her own symbol) in favor of the ol’ “boob window”. I hope she returns to the new suit, and that’s a rare thing for me to say about a New 52 costume.

Recommendation: I want to see how the rest of the arc goes and if Johnson can indeed write a better Power Girl when not trying to show bias towards a co-creation (Levitz). But this issue looked pretty good and worth a read. 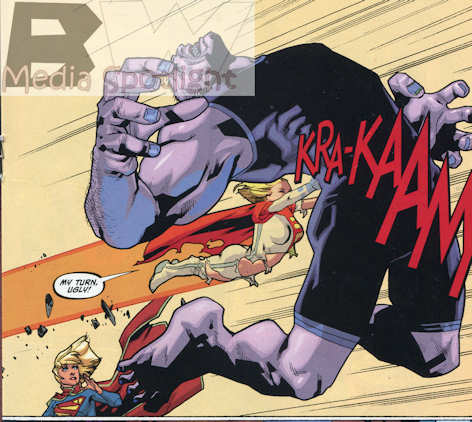 I know I should be commenting on this, but really, what DID happen to Luthor’s face?