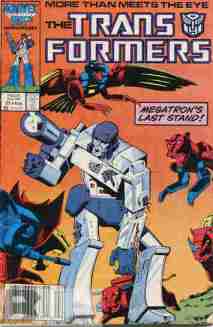 And so Megatron was fired as a zookeeper.

Megatron has won…wait, no he hasn’t. not having been the one responsible for Optimus Prime’s death has brought Megatron to the brink of madness, which Shockwave is more than happy to exploit for his purposes. As the Decepticons move from the coal mine to their base on an uncharted island off of the coast of Florida, Shockwave sets a trap using a new Combiner team, the Predacons! (Not to be confused with the Predicons of Beast Wars.) While they prove challenging, Megatron overcomes and nearly regains his sanity…until one last comment from Shockwave makes Megatron remember that Ethan could have save Optimus on a disk. In his final burst of rage Megatron destroys the space bridge and seemingly himself, with Shockwave resuming command of the Decepticons!

What they got right: If Optimus’s exit was weak, Megatron’s is the exact opposite. He doesn’t lose his final fight, unless you count his sanity a loss. He defeats the Predacons and their combined form of Predaking. His exit from the series is at his own hand, and with my favorite Decepticon leader re-taking the reins. Watching Megatron’s decent into madness is fascinating to see.

What they got wrong: On one page they get one of the Stunticons’ names wrong. That’s pretty much it.

Other notes: This would be Megatron’s last appearance in Budiansky’s run. Furman brought him back, but frankly he didn’t do much in that series so I’m not sure why he bothered. If this had been Megatron’s final appearance until Generation Two (where they needed him because of the toyline) he might have been better off. Shockwave mentions the alliance with Cobra and best as I recall it would be Budiansky’s only acknowledgement of the crossover outside of Goldbug. Also, Megatron never makes it to the Florida base, or at least not long enough to recreate the scene in the crossover. I’m guessing Higgins was told about the new headquarters but not when they were moving there.

Recommendation: A great exit for Megatron that is really worth a read. This is how you take a character out of a story. Too bad Optimus’ end wasn’t as thrilling.