I swear the more I hear from and about Dan Didio and his crew the less I understand what goes through their heads.

Granted I worry more about writers than I do artists considering my life goals but I’ve at least heard of Paul Pope. I know he’s pretty big in comics. I know that if he pitches, say, an all-ages version of Kamandi I’m going to at least think about it. Then again I don’t hate anything that benefits kids.

…Pope said he did test the waters, only to be knocked back. “Batman did pretty well, so I sat down with the head of DC Comics. I really wanted to do ‘Kamandi [The Last Boy on Earth]’, this Jack Kirby character. I had this great pitch… and he said ‘You think this is gonna be for kids? Stop, stop. We don’t publish comics for kids. We publish comics for 45-year olds. If you want to do comics for kids, you can do ‘Scooby-Doo.’ And I thought, ‘I guess we just broke up.'”

I wish I was kidding.

This quote came from a panel at San Diego Comic-Con hosted by First Second, where Pope and Gene Yang were promoting new books and discussing their history in comics. Now he doesn’t say which head, but this does sound like the current position at DC. Which is odd when you consider that DC started a family fan site…until you really look at it.  The Superman coloring pages are line art from covers that are way too shaded for a kid’s “coloring book” style posting. Maybe someone trying to practice coloring comics but not for kids. There’s an ad for the Trinity War and most of the other stuff are for tie-in comics to TV shows like the new Teen Titans cartoon or Scooby-Doo. There are no original kids comics being published by DC and hasn’t been since Billy Batson And The Magic Of Shazam! was canceled.

But what’s this nonsense about “we publish comics for 45-year olds”? Since bloody when? Or right, since Levitz gave the editorial roles over to Didio and friends and his replacement hasn’t seem to care less about what they do so long as they can find characters for Warner Brothers to mine. There was a time when DC tried to appeal to everyone and gave the mature stuff to Vertigo. But as I’ve noted in the past, the term “all-ages” is often misunderstood and in the push to “prove that comics aren’t just for kids” they’ve decided not to make any or just make a few token comics. Somebody on Twitter noted that they overheard a grandmother tell her grandkids to leave the comics alone because they aren’t for kids. So congratulations, jerks. You’ve just kept those kids from becoming comic readers. Way to boost the industry you claim to love.

By the way, do you know who does the most complaining about the current state of DC? People in their 40’s. People who grew up reading comics at least late Silver Age, like the 70’s. (As noted, I was given my first three comics in ’79.) They don’t like things like..well, this:

If I had an image of Clark getting all pissy about the state of the Daily Planet I would have gone with that instead, since this one is admittedly more a political disagreement. But it’s the continuing trend of keeping kids away from superheroes, the group that needs superheroes more than adults do since adult superheroes are cynical and lately real jerks. 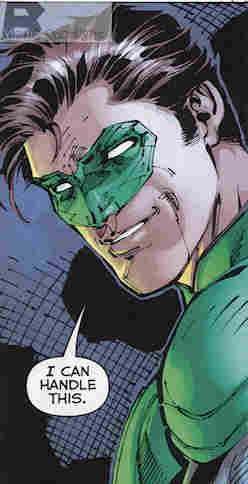 Two seconds later Superman, who didn’t like being hunted by Hal here and Batman, knocked him halfway across the city. Of another country. Maybe it’s because I’m only 40 and not 45…

@SW_Tronix Trust me, it didn't help.

Yeah, we had a “fun” conversation on Twitter about this yesterday and pretty much agreed that if this is the DC for 45-year olds DC has a terrible view of 45-year olds. Just be honest with yourself, or at least us, Dan. You guys make comics for yourself, a bastardized form of nostalgia where you insist that everything age with you and conform to your standards. Forget the “cool kids”, Didio, Johns, Lee, and the rest have joined the “everything for meeeeeeee” crowd, while turning DC into Marvel (while Marvel’s movies look more like DC).

By the way, Pope is promoting a new comic. Here’s the trailer.

And that’s what DC Comics passed up because somebody didn’t think a 45-year old would want to read that. People are stupid that way.