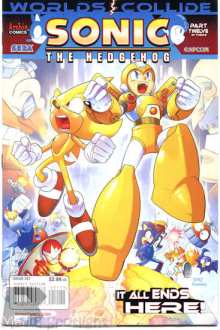 {concluded from Sonic Universe #54) Mega Man and Sonic are trapped by Wily and Eggman until the original (and still good) Robot Masters arrive to give Knuckles and Proto Man an opening to attack the Wily Egg. Willy and Eggman’s disagreements may be their undoing but as Mega Man is able to restore his reality Eggman may have screwed up Sonic’s attempt…but what will that do to Mobius? (final chapter of the “Worlds Collide” crossover)

What they got right: Action, team-ups, and a satisfying ending. That’s what I like to see. Mega Man and Sonic worked well together, as did their villains. And as the cover shows, we get not only Super Sonic but Super Mega Man using the Rush flight suit.

What they got wrong: I’m not sure why Flynn decided to have Sonic’s attempt to restore his world go wrong unless it was to “fix” certain things that will end up leaving a lot of cliffhangers from events in the Sonic titles prior to this crossover. I wanted to see how that all ended. Instead they’re jumping into yet another “reality is a mess” story.

Recommendation: Whether you hunt the trades or the individual issues this is a great crossover for video game fans, fans of Sonic, Mega Man, or my old counterparts in the Bob & George sprite comics community. Definitely pick this event up.

Now THAT’S an image that needs a double-page splash!