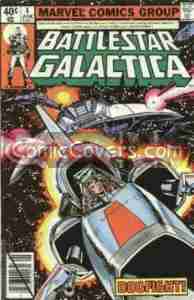 The comic continues its adaptations with the first non-pilot episode (which I reviewed here). Only instead of “Lost Planet Of The Gods” they went with “Lost Gods Of Kobol”. Maybe it was an early title or something.

It’s Apollo’s last patrol as a single man and thanks to Starbuck he doesn’t spend it lost in a starless void. Meanwhile, Jolly and Boomer land on a planet that houses a Cylon base, as well as a rather nasty virus that waylays most of the pilots, forcing Starbuck and Apollo to train female shuttle pilots to fly a Viper. This includes Serina, Apollo’s fiance. However, everybody does well on the mission to find a cure for the other pilots. But when Adama wants to enter the void, Baltar comes up with a plan.

What they got right: The entire first episode is up there, although condensed. Even with the page count and panel count of the day that means they had to speed a few things along, but I give him credit for getting the important parts in there.

What they got wrong: Like the previous adaptation arc, however, I think it would have benefited with one more issue. The Apollo/Serina relationship seems even faster here than it did on the show. Maybe if they had waited a few issues to develop that relationship as much as they would Sire Uri later on would have been a good idea. They don’t have to worry about the actress leaving so they could have done more with her, making her death later have more weight.

Recommendation: This one might be good for completists who want to follow the trip just through the comics but for casual fans the actual show might be a better choice since it just a shortened version of the story, unlike the previous arc, which only sped up in the final chapter.