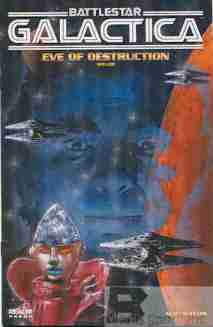 This isn’t really a comic as much as it is an illustrated preview of a comic they were going to make. There’s art with captions and one section with word balloons so you can argue that technically it is a comic book and I wouldn’t argue, but it doesn’t “feel” like a comic to me, if that makes any sense.

The first “story” is Iblis having a flashback vision or something to events with the Cylons, Baltar, and I think him dying in a bathtub as a young man. I don’t really follow, but there’s this one page with four panels of the same shot of Baltar that looks like the artist was showing the three stages of him drawing that shot. It looks pretty neat. All it really shows is that “Eve Of Destruction” might involve Iblis and the angelic beings Maximum called “Serpahs” and Realm (in interviews and behind the scenes art in the back) refers to as “light people”.

The second one is a somewhat more interesting chose, as a woman gives Zac visions of events to come (avoiding the subject of his death as best she can). I’m assuming this is the “daughter” referred to in the title. Who is she? Is she one of the “light people”? I guess that would also be explored.

Frankly, a story that looked at the spiritual aspects of the classic series might have been interesting. We know they hold Apollo in high regard but so little was made known in that one season. What were Larson’s plans? Like Realm’s, we will probably never know but this shows what a source of ideas Ron Moore dropped for his version. This one is totally for fans since it makes for a good art book, but not really anyone else.