BW Special Review: The Day Of The Doctor

I don’t know if you caught me and my technical difficulties on the webcast Sinner Radio Saturday night. Instead of the usual round table discussion he has on his show we popped in for a few minutes, gave our thoughts, and left for the next person. Well, I was on there, because the host’s fiance is one of my RU comrades and I’m hoping I didn’t screw up the show too much. Anyway, if you did catch me there I’m building on what I said there.

So…”Day Of The Doctor”. It’s the obligatory Doctors team-up anniversary special, and the first one for the New Who series. It would look bad for Steven Moffat to make another Dimensions In Time. Thankfully, that was avoided. But how good a job did he do?

The story actually begins with a webisode, “Night Of The Doctor”, which shows the 8th Doctor forced by circumstances to regenerate not into the 9th Doctor but a new incarnation the credits call “The War Doctor”, played by John Hurt. It’s War Doctor’s story that kicks off events. Wanting to end the Time War that has been destroying so much of the universe that a woman decided to die rather than be rescued by Doctor 8. He ops for a weapon from the old days called “The Moment”, which will destroy both the Daleks and Galifrey, as official 9 would later claim he did. And yet in the episode “The End Of Time” we learn it was actually time-locked but Rassilon somehow drug Galifrey to Earth orbit. Rassilon was never a nice guy, but the Time War had made so many of them cold enough to want to take over the universe themselves and the Doctor (Or I guess now the War Doctor) had to stop them.

There’s bound to be a bit of confusion as to how things will go. Moffat has been accused of ignoring events to suit his ideas, or at least not paying attention to the smaller, yet important, details. That’s nothing new in Who history as the old show contradicted itself now and then as well. Guess I’m just used to it if it’s happening. Personally, the idea of the Time Lords being taken out of the series is one I never cared for so I’m curious to see them brought back. I don’t know if the search is going to last the next episode, Peter Capaldi’s first arc as the Doctor, or just run until it’s exhausted, but I do like the idea.

She’s right, he did ask for the big red button.

And really, that’s my big thought on the special. I liked it, but I didn’t love it. I’m more excited at the possibilities set up by this story rather than the story itself. Yes, it was nice seeing two of the three New Doctors together (Christopher Eccleson has kept his distance from the show since leaving, which I do find disappointing), John Hurt did a good job as the War Doctor, and Billie Piper as the “conscience” of the Moment device made her easier to live with than if they had brought Rose back. I do agree with some others that having 10 see the “Bad Wolf” version of Rose would have made for an interesting moment but I’m not that upset they didn’t go with it.

There is some speculation about the War Doctor, and whether or not he simply took the place of #9. If that’s the case, as much as I thought Hurt did a good job, I wouldn’t have minded seeing #8 in his place. Paul McGann has been a great Doctor in the few audio dramas I’ve managed to hear and even people who hated the Fox-produced pilot movie praise his acting in the role. Seeing him do more in this story would have been great and wouldn’t have sped up the regeneration count by pulling another middle regeneration out of nowhere.

Fan theories exist that would save the Doctor a regeneration and the War Doctor has been referred to by at least one person I saw on Twitter as “Doctor 8.5”, but this throws our numbering off. There’s also the question of the 13 lives limit placed on Time Lords by the classic era writers and showrunners to keep the Time Lords from being too powerful. They’ve been shown to be able to manipulate that count, or at least the Master was offered the chance to restore his count in “The Five Doctors” because the Time Lords were desperate for help. Whether Capaldi is #12 or #13, they’re going to have to do something about that eventually. Maybe at the time they didn’t think the show would last this long? 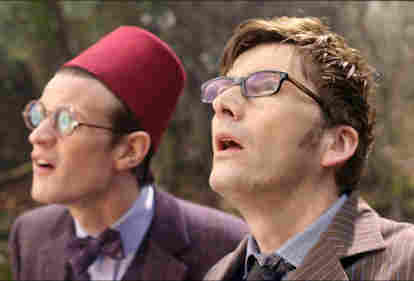 I wonder if they have the same…eye…doctor. Yes, I hate myself.

The big draw of this special is watching the two New Who Doctors who don’t hate the role together for the first time outside of IDW’s comics. David Tennant and Matt Smith worked well together, with the right balance of the usual Doctor bickering (Tennant even gets Patrick Troughton’s old gag about “you’ve redecorated, I don’t like it”) but also able to work together when necessary. The reason for this meeting of the two and the War Doctor was the Moment’s conscience showing War what kind of man he would become if he activated the device. The story could have really used Eccleson’s Doctor but the ones we have to make up for it, as Tennant’s Doctor is still upset about his past self’s action and Smith’s has been able to finally move on and try to forget the horrors he’s seen and undo some of the damage done by his immediate predecessor (including wiping his name from history). It’s a good look at the differences and similarities between the two while the War Doctor sits and watches. Again, nothing McGann couldn’t have done, but the War Doctor could keep 8’s hands…mostly clean.

I can theorize as to why the Daleks aren’t the main threat, but for the most part this is a typical New Who story thanks to the choice in foes, the Zygons, but that also serves the Moment’s goals of reaching the War Doctor’s inner Doctor, for lack of a better phrase. And the Zygons do make a good return in this story, being a lot closer to their original incarnation than most of the other returning threats in the new show. It makes for some good moments and led to my favorite part of the story, as 10 must tell the difference between future queen Elisabeth 1 and the Zygon impersonating her. There’s a good mystery that works out in the end before returning to the War Doctor’s decision.

“Day Of The Doctor” was a good episode and a good anniversary showing, but it wasn’t great, at least not to me. I liked it, but I wasn’t as excited as I wanted to be. I’m more excited for the potential of a “searching for Galifrey” storyline and the question of what happened to Rassilon and the Master once they find it. Clara at least is more prepared for regeneration than any of her predecessors so that should be brief. So I’m more excited by what the episode set up than the story itself, but it’s still good.

And before anyone asks, the Tom Baker cameo was a nice addition but who he is or isn’t is kind of up to the viewer, I did see Peter Davidson’s The Five(ish) Doctors Reboot and it was hilarious, but have not yet seen the docudrama about William Hartnell’s years as the original Doctor, An Adventure In Time And Space. However, I do hear a lot of good things about that movie and hope to catch it soon.