When it comes to Friday Night Fights I like to find the somewhat different fights, where the fist, foot, or weapon/superpower isn’t the primary tool. Tonight I found one of those for you. If you recall my look at the Giant Batman Annual at the beginning of the week you may remember one of the stories was how the Bat-Signal saved the day. Let’s see that in action.

Reporter Dave Purdy is charged by his editor to find a story where the Bat-Signal alone saved the day. His efforts have been in vain, so he’s settling for covering a limited display of the Bat-Signal at a museum because I’m sure they won’t need it to call for Batman and Robin to help, right? There were some weird decisions made in the 1950s. Like when Tiger Bishop escapes prison and decides to hide in the very same museum. 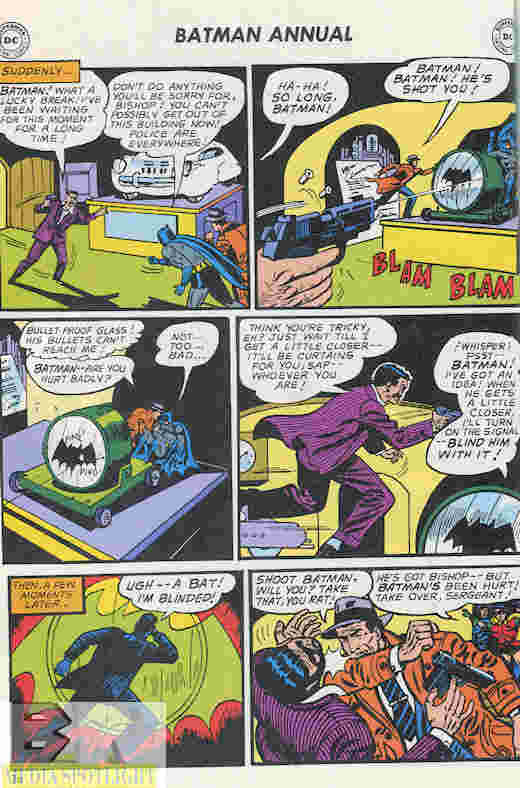 Wait, a story in which Batman is hurt? You’d never see Captain Preparation doing that today.

It may have been Purdy’s fist that took out Batman, but I’m giving this win to the Bat-Signal. It deserves a bonus.

Head to Spacebooger.com and vote for your favorite Friday Night Fight. (Forum membership is NOT required to vote, only to comment.) Winners of these 12 rounds head to the Prize Fight so feel free to join in. We could use the competition. Check Spacebooger out on Tuesday for rules.

I also avoided the “blind as a bat” joke. Never say I didn’t do anything for you.