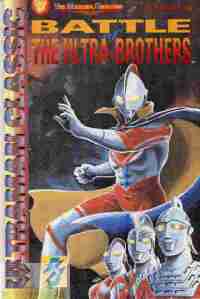 Even Ultraman knows how cool the cape is.

Ultraman Classic: Battle Of The Ultra-Brothers #5

This is one I can’t give a full review for since I don’t have the first four issues and thus am missing part one, where space pirates apparently took over the Ultra Battleship (I didn’t know they had one of those but I’m not up on full Ultraman lore) and plan to sneak attack Earth with it. However, Ultra Seven survived whatever happened last part and teams with Zoffy and other Ultras to regain the ship. I liked what I saw and wish I could see the first half. The second story I can do a normal review for.

The space ninja assassin Assassin (I’m totally serious, that’s his name, at least in the English translation) is hired to take down Ultraman Zoffy, leader of the space fleet. He succeeds in injuring him before Taro interferes. Assassin proves himself invulnerable to most of the Ultras special attacks and even uses limited mind control on Ultraman Jack (who I used to think was the Towards The Future one, but now I hear his official name is Ultraman Great so I’m lost on this one) to try to find where Zoffy is. However, Ace’s “Space-Q” attack is enough to finally hurt him and he realizes that he could be killed with his own sword, which Taro does.

What they got right: I like the brief look at life on M78. Mostly that there are rules against flying in city limits. The Land of Light actually has cities. I like that the danger was high. When you’re fighting an Ultra being a little godmodding might be needed.

Recommendation: I want to get the other four issues. The comics I reviewed previously were American and the series we’ll start reviewing next week comes from Korea, but if the other four issues are as good as this, the only comic I have that’s actually Japanese in origin, I definitely want to see more.