“Fine, I’ll get of your stinking lawn, old man!”

Four years have passed and Godzilla has only appeared in Lucy’s nightmares. Woods (force to retire after his injuries) is pushing to keep CKR funded but Congress doesn’t believe Godzilla will return. They’re in for a surprise. Anguirus is in for his own surprise since Russia has a budget-version MechaGodzilla. And the guy responsible for giving to them doesn’t seem like a nice guy.

What they got right: Usually I have issues with time skips but here I think it works. It is possible that there are no new major kaiju events and our last surviving alien (my money’s on the guy forcing people to buy budget MechaG) might need that long to set up his next scheme. While I personally find budget MechaG ugly compared to the real deal I like the nod to original movie version (with the fake exterior…which also looks ugly and low-budget) and he does look like a cheap knockoff of the real MechaGodzilla. (Making it a cheap knockoff of a more expensive budget.)

What they got wrong: The humans don’t work for me here. Fornow’s characters seem slightly more exaggerated than I’m used from Mowry’s art. For example Lucy looks a bit thin even out of her nightmare and our knockoff salesman doesn’t look quite right, either. I would be going to far calling it bad but I’m not fond of it. It’s all I can point to, though so maybe it just sticks out more to me.

Other notes: I’m not sure what my opinion is on Zilla being stuck just off of the island. Chavez tells Lucy “Maybe he’s not welcome?”, presumably by the other kaiju and I wonder if that isn’t a meta reference to the Godzilla fans. Maybe they need to watch the animated series, which I feel redeems the ’98 GINO and at least makes him a cool monster.

Recommendation: I hope this becomes an ongoing because I like where this series is going and even if some previous stories (Kingdom Of Monsters and the adjectiveless title) were in the same continuity I like what this series is doing. 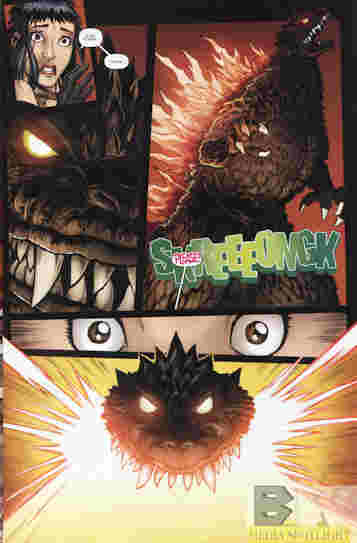 As if interrupting her roller derby win wasn’t enough. Not even kidding, that happened.