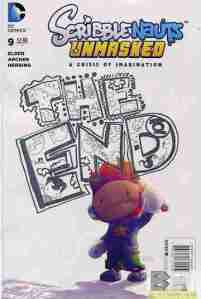 Scribblenauts Unmasked: A Crisis Of Imagination #9

The Scribblenauts and the heroes of multiple realities battle to free the Justice League and stop the Anti-Monitor. But when things are at their worst, the kids and their dopplegangers will come together and change their lives.

What they got right: I was talking last week about Kurt Busiek playing with the history of the DC and Marvel universes. Here Elder does his own playing, and with other titles in the DC Multiverse. It’s also a nice, happy ending for our four kids.

What they got wrong: But will future Scribblenauts games go along with it? (I hope so.) And here’s a totally personal nitpick. Of all of the Tangent characters, why did they go with Superman and not the Atom or the Flash. Personal preference and I haven’t seen the second half of Superman’s Reign, but in the part I did he was a tyrant. Like every other Superman and Superman analog not in the main universe lately.

Recommendation: This is a great series for young readers and older readers who played the game or aren’t scarred off by all-ages comics. Highly recommend the entire series. It’s nice to see fun stories with DC superheroes. They used to do that, you know.

In lieu of spoiling something this was the best Best Scene I could come up with.