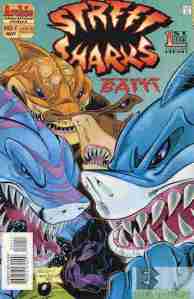 Overdoing the extreme close-ups. That’s the 1990s for you.

(It’s not officially marked as volume 2, I’m listing it that way to tell it apart from the adaptation miniseries.)

The Sharks find a quiet beach to go surfing at, until a group of crabs spoil their day. Dr. Pirahnoid comes across one that got Streex good, finding it’s radioactive and already slightly mutated. Of course he further mutates it, but it gets out of control, and the Sharks have to deal with a giant crab, heading straight for Fission City.

What they got right: Fighting a giant monster is superhero right of passage and while you could debate if the Street Sharks fit your definition of “superheroes” it’s good they get on with it. Skolnick, who wrote the adaptation of the previous miniseries appears to be taking a different direction from the show and since this is based on a toyline I’m interested to see where he’s going.

What they got wrong: That said, Pirahnoid turning back into Paradigm may have been explained by the cartoon as the mad doctor getting angry, it was still a feature of the toy so I don’t know why he went with 24/7 Pirahnoid. Also, the Sharks can suddenly “swim” through the ground like water rather than digging through it and tearing up the street. Maybe Skolnick had a problem with the tearing the streets up part but somehow this goes beyond science into possibly magic. I don’t believe this was explored in this miniseries and there were no more comics after this.

Recommendation: I’m a little more curious, but these are stories that weren’t adapted from the cartoon. Still, it’s not interesting me like I want. We still have two more issues to go, though, and that my save its place in my collection.