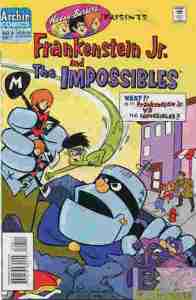 Are we going to be doing this homage every week now?

FEATURING: Frankenstein Jr. and The Impossibles

Frankenstein Jr. gets the short end from this intro, doesn’t he? I mean, he’s only a giant robot who fights other robots and monsters. Why would kids watch that when you have a music band that has the same name as their secret superhero team name? Sadly, Frankie only had one adventure per episode, too.

Frankie’s solo adventure has him and boy genius Buzz Conroy taken on an army of dinosaurs, controlled by the Dino-Master. Also, they shoot eye beams because that’s a Hanna-Barbera staple. There’s not much else to say there. Your inner child will be cheering him on.

The Impossibles have a solo adventure as well. They fight a villain named Feedback and his sidekick, Roadie. Feedback’s guitar can make people fight each other or drive the Impossibles’ powers haywire. But a quick sneak attack saves the day. Short but fun.

But we’re all here for the third story. Like Space Ghost and Dino-Boy, Frankie and the Impossibles only showed up together during transitions. Here, we get a team-up story…sort of. The Alien Brain takes control of Frankenstein Jr., so Buzz calls in the Impossibles to bring him back under control. Like the others the stories are short, but fits well into the space allotted. The show was like that as well. The art for all three matches the cartoon designs perfectly as do the stories.

Fans of these two shows should grab this if they don’t already. For the rest of you, if you like fun stories with giant robot superheroes this is a comic worth looking into, and the same goes for the TV show.