“Yesterday’s” Comic> The Adventures Of Superman #514 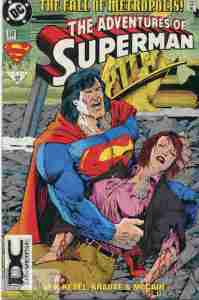 Get used to it, Kal. This is going to happen whenever the writers need to make you bad.

The Adventures Of Superman #514

As Superman goes to STAR Labs in search of a cure for the clone degeneration, Luthor’s next failsafe kicks in as a mist envelops the city, making people see their deepest fears. For one guy it’s an alien invasion, for others it’s monsters, and for Superman it’s seeing Lois die along with the city and being a failure. However, vision Luthor’s taunting is actually enough to break him out of it, as Hamilton arrives with the cure…but in the trouble bringing it here (even getting help wasn’t enough to help him through the visions) he ended up losing his arm. Meanwhile, Luthor has one final vengeance planned, using the Kryptonian battlesuit that brought Kal-El back to life!

What they got right: It’s good to see that Superman can be affected by things that affect us normal humans, like the delusion-producing gas, and it gives us a look at Superman’s fears, reminding us about the “man” part of Superman. And look, Superman doesn’t turn evil after thinking Lois died. How novel.

What they got wrong: Wait, Superman didn’t go back for the robotic battlesuit that is filled with alien technology? And why are survivalists in a city instead of somewhere in the country? You’re ruining the extreme stereotype here, guys. And why did Dr. Hamilton have to lose his arm on top of losing his job with STAR Labs? What do you have against him, Super-Writers?

Recommendation: A good story and a good addition to the “Fall Of Metropolis” story line. Worth giving a read.