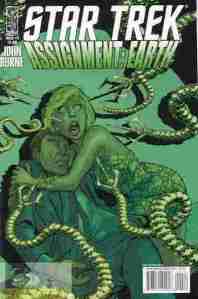 An encrypted message left in Beta Five’s memory banks by the previous agents is finally decoded, leaving Gary to suspect their deaths wasn’t an accident. Our team goes to investigate and learns the car accident was caused by Counter Strike, an extremist version of the group Gary works for that prefers to wipe out anyone whose technology is exceeding their morals. When just blowing them up isn’t enough against Vulcans and (I think) Klingons they adopt a “let them blow themselves up” approach, and may be the source of the advance technology they’ve been seeing. Gary and Roberta are captured by Counter Strike until a wounded Gary Seven can take out the force fields so that he “bosses” can rescue them. The mission to protect Earth continues even though Counter Strike is wiped out.

What they got right: There’s a fun opening as Roberta uses Beta Five to create a dress for her date that weekend, and another where Gary’s plan to pretend he and Roberta are on honeymoon (while undercover) hits a snag when the motel manager assumes Roberta’s his daughter. I like the idea of a potentially recurring foe for our heroes in the form of evil agents.

What they got wrong: The designs of both alien groups (the same race apparently), while imaginative and I don’t know if Roddenberry even had a design for them, seems a bit difficult to pull off with late 1960s TV special effects. It kind of interferes with this feel of the series that wasn’t. And if they can assume human form why take human children, raise them with all of the Earth knowledge they have, which seems easy enough for Gary to not be caught unaware by even slang and pop culture, and send them back to Earth? Also, the message, and the accident that made Gary come to Earth in the first place, is said to have happened three and a half years ago. Even assuming the first two comics took place a year after the backdoor pilot, in that story the last time Roberta saw “Smith and Jones” was less than two and a half years ago. Was Byrne keeping track of his own timeline?

Recommendation: I’m still digging these scenes, daddy-o and I won’t promise I won’t write like that again, ya dig? Pick this comic up.