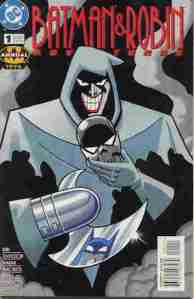 The Batman And Robin Adventures Annual #1

When Andrea learns someone has put a hit on Bruce Wayne, the Phantasm returns to Gotham to warn and protect him from Kitsune, an assassin from Japan whose hat can change her appearance. (Not true shapeshifting, more like a holographic illusion.) However, Bruce isn’t the target, Andrea is. Arthur Reeves lost everything, including his looks thanks to a bad reaction to the Joker venom. Batman tries to rescue her but gets caught himself. However, Andrea manages to trick Reeves into offing himself. Finally the revenge circle is complete, and taken the incarcerated Kitsune’s hat, Andrea escapes again.

What they got right: I would have said that Mask Of The Phantasm didn’t need a sequel story but this proves me wrong. The loose ends with Arthur, how the Phantasm costume works, what happened when Andrea and the Joker disappeared into the fog and how they both survived, are all done well. The mystery of who ordered the hit and the real target were both handled properly, how a twist should be done. With so many artists I like how the style doesn’t change much so you can’t really tell what team did what without the credits in the back in the book.

What they got wrong: This is The Batman AND ROBIN Adventures but Robin was absent from this story. I know it’s Bruce and Andrea’s romance but is Dick unaware of the events, in both flashback and current events, of the movie? I’m curious what he would have added to the proceedings.

Other notes: There is a tribute also in the back to Mike Parobeck, who died of diabetes complications. This was the last comic he worked on.

Recommendation: This is a great follow-up to Mask Of The Phantasm, which happens to be my favorite theatrical Bat-film. Check this comic out if you liked the movie as well.