Enough sick days. I need to return to writing before I forget how to. That’s right, folks. The side effects are gone (except for this annoying cough and getting my sleep cycle on course) and I’ve missed enough Friday Night Fights. We even have a new tournament going.

James Nathaniel Toney (born August 24, 1968) is an American professional boxer and former three-weight world champion. He has won the IBF middleweight, IBF super middleweight and IBF cruiserweight world titles, as well as having challenged for the WBA and WBC heavyweight titles. Toney was voted by both The Ring magazine and the Boxing Writers Association of America as their “Fighter of the Year” in 1991 and 2003.

If I understand our Master Of Ceremonies his nickname was “Lights Out”, possibly referring to what he did to his opponents. Or he was really that bad, I don’t follow boxing. I do follow superheroes, however, and it’s time to see Batman’s eternal war against crime. And windows. And animals. This is one I’ve been sitting on since I got sick for the second time.

That’s how far behind I am, kids.

I’ve been out of things for a while so here’s a reminder: Poison Ivy put her whammy on Robin and now he works for her. Harley Quinn feels left out of this new team, and Batman wants his partner back. And yet, when the Dark Knight arrives at Ivy’s greenhouse Harley’s “babies” are waiting. Which are a pair of vicious hyenas because that’s what happens when you fall for the Joker. 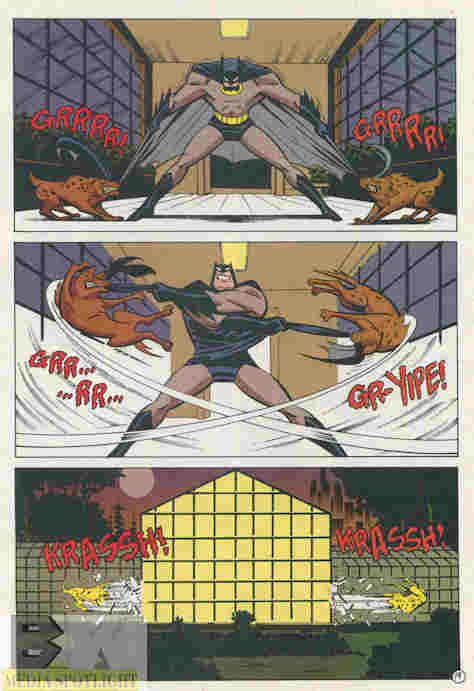 And you thought messing with SUPERMAN’S cape was a no-no?

Batman; ever the threat to windows and animals. And crime. He does that too I think. 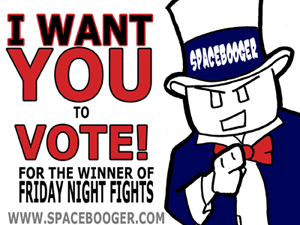 Head to Spacebooger.com before Sunday night and vote for your favorite Friday Night Fight! Winners of these 12 rounds head to the Prize Fight, so feel free to join in. We could use the competition. Check Spacebooger on Tuesdays for the rules.