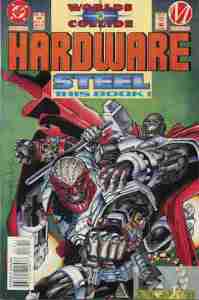 (continued from Superboy #7) Alva and Hardware acquire the services of Transit to create a mid-space that Alva and Hazard can create a way to trap Rift, both planning to control his power. Hazard sends his lackey out to gain Steel’s help, and in the mid-space they build the machine to trap Rift. However, Steel catches Hardware trying to add something that will kill Rift. Since heroes don’t kill in Steel’s eyes, the two armored superheroes do battle, until Steel wins Hardware over by showing how and why he won’t give up if it means killing someone. Hardware volunteers his lab to help Steel repair his armor, damaged in the fight, so they can finish the trap, and NOT kill Rift in the process. (continued in Superman: The Man Of Steel #36)

What they got right: I’m on Steel’s side about not killing people, even the villains, if no other option exists. Steel never really got to meet Fred but he is still a victim here, even if he has become a threat to both realities, so I’m on his side here. Fred was a nice guy after all. I also like how Alva knows how the villain team-up usually goes and just says “yes, yes, we’ll betray each other later but for now we have a common threat).

What they got wrong: Steel went rather quick with Hazard’s pal. We don’t see him questioning working with Hazard, unless he doesn’t know Hazard was behind Ameritek. He doesn’t seem to be questioning anything considering Hardware is easily aware Alva and Hazard are bad guys and is kind of guilty by association. Did they all pretend to be noble around Steel except Hardware? Also, the title doesn’t make sense to me.

Recommendation: While this feels like another diversion from the main story and I don’t like watching superheroes fight it’s still a decent chapter to the event. Worth getting for the complete story.