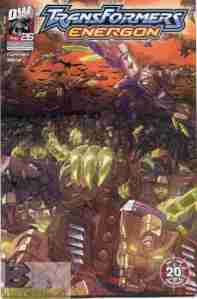 “There’s only ONE port-a-potty?”

Just before the end of the previous issue Optimus had formed a partnership with the Earth’s government. However, a group of protestors wants to assume the worse. With Optimus missing it’s up to Jetfire to secure reinforcements and he may have an ally on the council. Meanwhile, Megatron tries to force Optimus to help him get into his new body, but Optimus doesn’t trust him. However, Megatron has a few trump cards. Tidal Wave has a new body and calling himself Mirage. He and his new pal (Slugslinger, who isn’t named in this issue) disrupt the Omnicons’ attempt to check an Energon deposit underwater, leaving Kicker in big trouble. As this goes on, Rad and Alexis part ways just as an army of Terrorcon drones attack Los Angeles (where they are), Toronto, Moscow, and Tokyo…and Alexis’ cab is blown up!

What they got right: See, Simon, if you really need to have multiple things happening, make them all connected to each other. The attacking Terrorcons draw those events together. Plus we have a mystery as Tidal Wave/Mirage mentions some new boss.

What they got wrong: Snowcat wasn’t Cyclonus in a new body so why do that for Tidal Wave/Mirage? You were doing so well.