This is actually a new series, part of the DCAU rotation in my reviews but while it is written and drawn in the “Adventures” style (at this point tie-ins to The Adventures Of Batman & Robin and Superman: The Animated Series) it’s allegedly set in regular DC continuity and reflects that universe. Except with the regular DCU sneaks into the Adventures titles despite contradicting what happens in those two and later DCAU TV shows. I put this in the Adventures section because of an annual we’ll see later since none of these tales affects other stories in the DC Universe proper. 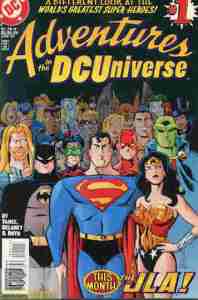 In hindsight, taking this group photo on Burrito Tuesday was a bad idea.

Adventures In The DC Universe #1

As the members of the JLA (roll call: Superman, Batman, Wonder Woman, Martian Manhunter, Aquaman, The Flash (Wally West) and Green Lantern (Kyle Rayner)) defeat various villains, they appear to vanish. The benefactor of this group of villains (Parasite, Scarecrow, Cheetah, Blockbuster, Major Disaster, Grodd, and Doctor Light), taking the name Cypher, tries to us a battlesuit against the heroes when they track the teleporter signal, which he also uses to escape. However, the teleporter belts and battlesuit were only meant to learn the strengths and weaknesses of the JLA for their next encounter.

Also of note is egotistical businessman Winston Kenney building a tower in Keystone City and possibly buying Linda Park’s TV station, where she is a news reporter, and his partner Gadsen Graves, both of whom are recurring characters for the first half of this series.

What they got right: This doesn’t look like a 90s comic. Using the art style of the animated tie-in comics of the time, the coloring isn’t dark, the story isn’t dark, and it looks like they’re actually trying to get kids interested in the DC titles (unlike today’s DC, which shuns anything that looks like it might be for kids not connected to Warner Brothers Animation). There’s even a recurring villain exclusive to this series.

What they got wrong: When they introduce the various members of the JLA (the name the Justice League of America was going by at the time), Batman and Superman’s intros use their Adventures tie-in logos rather than their regular comic logos. At times I wonder which universe this series is taking place in and that doesn’t help. Also, some of the problems I’ve seen in reviews for Justice League #1, from the current series, shows up here as well. It’s a quick introduction of the heroes that make up the JLA as well as the style of the series, introduces the three recurring characters, and not much else.

Recommendation: If memory serves this is a fun series overall so while this issue is a bit weak it’s still worth having if you want to check out the full series.