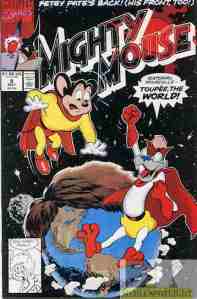 Great. I bet Hair Club For Men gets blamed for this.

While I do give Ralph Bakshi credit for giving Mighty Mouse a rogues gallery besides Oil Can Harry, there is one character that was stupid even for this show: Petey Pate. His own gimmick was that he was bald and tired of being laughed at for his, so his crimes involved hair. For example in this story Petey wants to cover the Earth in hair. Mighty Mouse takes all the beams out of the old factory from Bakshi’s show and creates giant scissors to stop his plans. At least the chief of police actually figures part of the caper out and calls Mighty Mouse in. Otherwise, good grace this story was stupid. Like I said, it looks like Gallagher is slipping like he did with the later ALF comics.

Over in Bat-Bat’s origin story, Tick, whose family was killed when the dog at the flea circus was forced to get a flea dip (and yet nobody cares about the tick that is morning his now dead parents?) becomes Bat-Bat’s new ward, when Bat-Bat learns who was responsible for his parents’ death…the Smoker! (Is this is supposed to be an adaptation of the Bat-Bat movie from a previous comic?) Smoke manages to escape but Bat-Bat will be ready for him. I, however, must also prepare…to suffer.

This issue is just as bad as last week’s. It’s not horrible, just really, really dumb. I can’t recommend this issue as a Mighty Mouse fan or a critic.