People forget that between Fox’s Batman: The Animated Series and Kids WB’s The New Batman/Superman Adventures there was The Adventures Of Batman And Robin, a continuation of B:TAS that gave more focus to Robin, making them equal…except there were plenty Batman only tales but no Robin only tales. That part is disappointing. 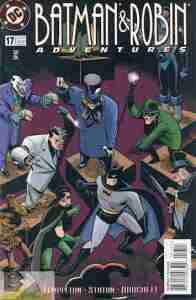 Alice, the woman Jervis Tetch stalked in his first appearance in the show as the Mad Hatter, is going to get married. So Tetch comes up with a plan to marry her first. While the Hatter planned on Batman, he didn’t plan on Robin, who stops Tetch with the Dream Inducer helmet he used on Batman in his second appearance, which malfunctions and permanently traps Tetch in a dream world where he defeats the Dynamic Duo while Alice happily joins him as his bride in Wonderland.

What they got right: We don’t often see what happens to the people Batman and Robin save so I like the idea, and the art is good as usual for this series.

What they got wrong: Not like this, though. Dini seems to be revisiting the two episodes the Mad Hatter starred in (although he cameoed or was mentioned in other ones). I also have to assume that he woke out of it since he shows up again in the WB show, and maybe some cameos and mentions after the issue was published (I’d have to research that last one, but I know he was on the WB show, including a Superman story).

Recommendation: This issue is just a rehash of the Hatter’s first two appearances. It’s just not that good an issue. Give it a pass unless you want the full set.